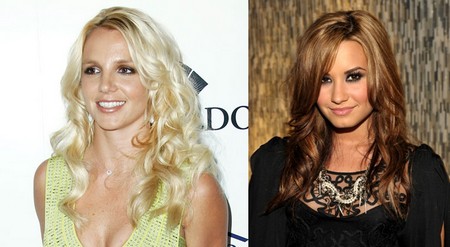 Is Simon Cowell going through old rehab log books to find his two missing judges for next season’s The X Factor? It would appear so as TMZ’s newest report is that Britney Spears and Demi Lovato are the frontrunners to replace Paula Abdul and Nicole Scherzinger on the panel.

Spears famously shaved her head and voluntarily did a stint in rehab in 2007 at the height of her volatile escapades – before her father went to court and took over her life!  She is still not a free legal adult as she is under conservatorship.   Lovato is fresh off time at an Illinois facility for alleged depression, cutting and eating disorder addictions.

But they’re talented so sign ‘em up Cowell!  TMZ reports Britney is seconds away from agreeing to a one-year deal for $15 million. Demi, however, doesn’t have an offer yet.

Miley Cyrus, Avril Lavigne, LeAnn Rimes and Fergie are also names floating around for the fourth spot. However, no offers have been made.

Cowell is obviously looking to legitimize The X Factor more this season with bigger names. Word is he sacked Abdul because she was too “soft”.  Does he think he’s going to get pit bulls in Spears and Lovato? Lovato did punch a backup dancer on an airplane one time but I think that was when she was in the throes of her self-described “dark period.”  She is currently out.  And has anyone heard Britney speak above a whisper in over 4 years? I don’t know what kind of medication her dad’s got her on but homegirl is comatose most of the time.

The only way those two are going to make interesting TV is if they get in a girl fight and start pulling each other’s weaves over whose Disney show was better – definitely Britney’s since Ryan Gosling was a Musketeer at the time too.

I’d much rather see my girl Miley up there. She hasn’t been to rehab yet, which is nice, plus I don’t think she’d hold back from getting all sassy with Cowell. Miley was raised to think she was special and give her opinion. She would be a formidable opponent. I think Spears and Lovato would cower too easily. And there’s nothing worse than listening to Cowell talk in that pompous English accent without getting checked every once in awhile.

Am I wrong? Who do you think would be the best judge?