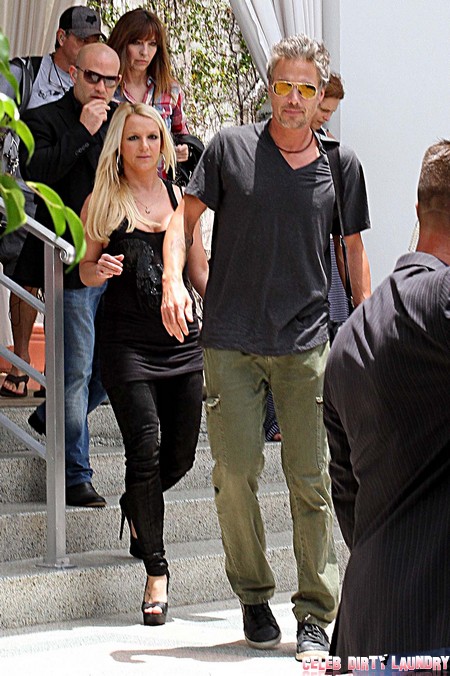 The relationship between Britney Spears and Jason Trawick seemed a bit odd from the get go.  They first started hooking up not long after Britney’s ride on the crazy train and it made everyone wonder why Jason, a seemingly stable entertainment agent for William Morris, would want to date such a troubled, fallen starlet. Rumors spun that their dalliance was all about money and control of her assets and now it seems that a source close to Britney is all but confirming it. Putting a ring on her finger and planning a winter wedding may not be enough for Jason to hang on to his longtime girlfriend.  According to the Enquirer, Britney is feeling more like Jason’s business rather than his (future) wife.

“I think Britney’s father hired Jason to be her watch­dog from the very beginning,” said a close source. “If that’s true, and she’s finally figured that out, she will call off their wedding.  Jamie wanted Britney to fall for Jason so he wouldn’t have to be with her all the time.  As Britney’s court-appointed guardian, Jason is basically paid to be her keeper, and it seems like he’s at her side all the time,” said the source. “Britney doesn’t like it, but she has no choice.  If Britney walks off the set, dawdles in her dressing room or complains about some­thing, Jason tells her to quit acting like a diva.” says a source.

If you’ve paid any attention to Britney these past few weeks during her X Factor judging stint then you already know that the big eyed, bubbly star that first caught everyone’s eye is long gone. Some might say that Britney simply grew up and became a young mother. I would say she looks drugged to the wall and the tears that she sheds for X Factor hopefuls’’ are more about the state of her life than anything else!  She is obviously not just advised but in fact told what to do and if Jason is doing the bossing it’s no wonder she’s not feeling the love!

Will Britney call off her wedding and turn her relationship with Jason into something that truly is strictly business? Tell us your thoughts below!