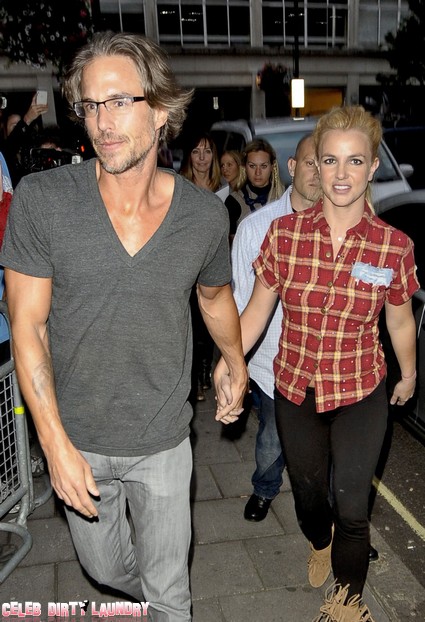 Britney Spears is going to have to wait a little while longer before she can marry fiancé Jason Trawick. The 30-year-old pop star has had to delay her nuptials to the 40-year-old agent because of an outstanding lawsuit from her old manager Sam Lutfi.

Well, Lutfi is still trying to get a piece of the Britney pie and it suing the “Circus” singer for breach of contract and her parents for libel and defamation.  In order to keep the high profile star off the witness stand, she and Trawick will have to wait until the trail is over to get married.

“Lawyers for Britney’s conservatorship have been successful in keeping her from being deposed in the Lutfi litigation,” a source told RadarOnline.com. “She could get married under the conservatorship, but the judge would have to sign off on it. If that were to happen, lawyers repping Lutfi would absolutely go into court and argue that if Britney were able to get married, she should be able to be deposed. There is no way Team Spears is going to let that happen.”

While under conservatorship, Britney is legally considered non-competent and it essentially a child in the eyes of the law. Britney’s father Jamie has already agreed to end the conservatorship as a wedding present to his daughter, but if it were to end before the trial, Britney would lose the protection and privacy that it affords. As most people would kill to hear all the gory details about her meltdown—and you know the lawyers would go there—I guess it makes sense that her team is trying to shield her from this.

While they can’t get married until after September 22nd 2012 (the trial is scheduled for September 11th and will last a little over two weeks), the happy couple isn’t slowing down their planning of the affair, a small wedding in Britney’s hometown of Kentwood Louisiana. “Jason is fully embracing having the wedding in Louisiana. Britney has hired a wedding planner and is letting the pro handle all the details,” a source told Radar Online.

The couple has vowed to not let these legal trouble ruin their happiness, as the source explains, “Britney and Jason aren’t in a rush to get married, they are enjoying being engaged.”