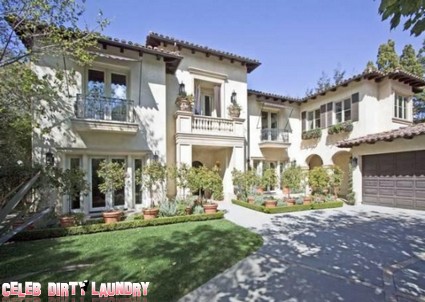 Britney Spears is getting ready to become Mrs Jason Trawick. She’s finally sold the Beverly Hills estate where she lived when her life fell apart a couple of years back. It’s the property where Brit suffered that infamous meltdown in 2008 and was strapped to a stretcher and taken to hospital.

It may have taken a while to sell but according to TMZ the pop princess has made a tidy profit. It was listed at $2,995,000. But the mom of two has sold it for $4,253,000. Apparently it was purposely listed at a low price so it would spark a bidding frenzy – and the plan paid off. She’s over a million dollars ahead….and could get even more. There’ll be a special court hearing next month because of the conservatorship and anyone can outbid the accepted offer.

The house is a two storey Mediterranean design with five bedrooms, six bathrooms, chef’s kitchen, fireplaces, a pool and spa. It’s located in the gated Summit Community just off Mulholland Drive.  It’s a great family home but the Femme Fatale wants to start fresh with her fiance and two boys Sean Preston and Jayden James.The house holds a lot of painful memories from a dark time in her life and it’s time to move on.

So has she bought another home? Real Estate Sources say she’ll rent with Jase for the time being until they find their dream home.