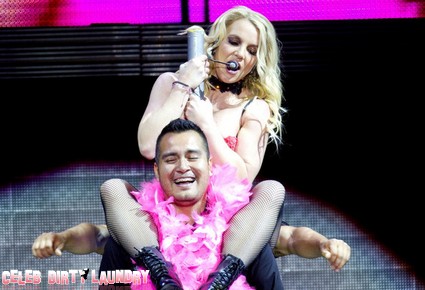 The Sun reports that Flores has a million-dollar deal with a major publisher for the book. And they are planning to release the blockbuster – or the Britney buster – right when Britney marries her third husband, Jason Trawick. What a nice wedding gift!

Flores is a an ex-policeman and told a source: “Britney has a huge sexual appetite and, from what she told me, her tours were an anything-goes environment.”

Flores added: “I was in her bathroom and saw this picture of her in a tub with some girls. It was very sexual. She told me, ‘That was on tour and s*** got crazy.  I asked what she meant and she said they all got it on. Her and the girls.”

As we reported at celebdirtylaundry, Flores attempted to sue Britney for sexual harassment but he was thwarted when she hid behind her legal status – she is under conservatorship.

Do you think Flores is just making this stuff up looking for a big payday? When Britney was a free adult with full legal rights, before she was brought to heel and placed under conservatorship, her behavior was wild and totally out of control. At that time anything was possible. What makes me suspicious of Flores’ stories is that he did not witness any of the supposed wild sexual behavior himself – by the time he was around Britney was under conservatorship – she has been since 2008. Sound off in the comments below.