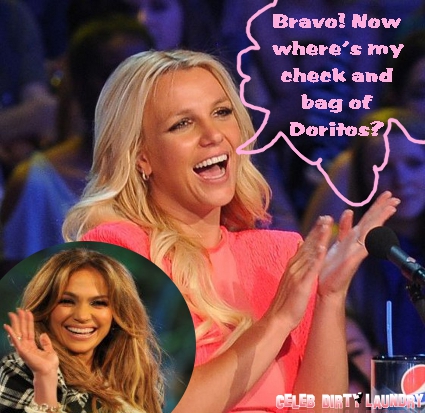 A recent internet rumour was doing the rounds that Jennifer Lopez and Britney Spears were being more competitive than first thought. This is all SO TRUE! J.Lo received $12 million for her first season of American Idol. Britney’s bottom be-all-and-end-all amount was $13 million for The X-Factor, after which she settled on $15 million.

The ongoing rumours about J.Lo and Britney’s reality tv rivalry surely has not yet reached its peak, and insiders believe that J.Lo’s exit from American Idol has given the one up on Britney Spears. American Idol seems to be fading into the obscurity of reality television, as it had some of the lowest viewership amounts in the history of the show.

The X-Factor’s second season has been touted as a future watershed television moment. Britney has been super controversial in her first few days as one of the judges on The X-Factor, living up to her initially reported X- Factor demands and diva behaviour. J.Lo’s upcoming tour and single releases might finally cripple Britney’s superstardom.

Does this mean Britney reigns supreme Queen of the judges? J.Lo is the biggest star in the world currently, but as we all know, the music industry is a fickle place . . . .