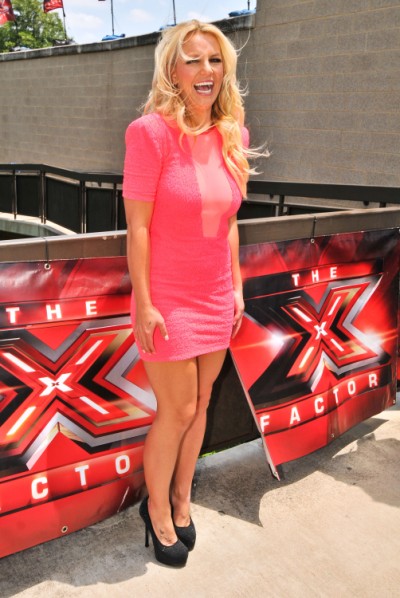 Britney Spears’ X Factor rider has been leaked and clearly the pop star can’t be asked to perform, or watch other people perform, on an empty stomach. According to Contact Music, Britney they call me tator salad Spears needs more than her $15 million paycheck to survive the year.

The Toxic singer – who has signed a $15 million deal to join the panel of the US version of the show alongside Demi Lovato – has made a number of backstage demands, including six cases of Diet Coke containing 24 cans, which must be replenished every week. She also wants ten snack size bags of Doritos for her and her team a day, twelve vases of magnolia blossoms in her dressing room, ten pieces of chicken and four pints of potato salad every week. According to LOOK magazine, Britney – who is engaged to Jason Trawick – also requires a beauty team which includes a personal manicurist, a facialist and a massage therapist.

The crappy food demands are actually a bit surprising. I know Britney enjoys Jessica Simpson type delicacies but she’s supposed to be on a diet. A few weeks ago the UK’s Female First magazine reported Simon Cowell was wooing Britney with healthy figs and dates to get her in the judge’s seat. They had an agreement that Britney had to ditch the trailer park chic hair and outfits and look amazing by the time the show started. As utterly delicious as Doritos and Snickers are, they aren’t diet foods. But they are comfort foods, and with the latest drama that Britney has already walked out of the X Factor set, perhaps the troubled star needs a hug from her favorite goodies. I can’t harp on that. Sometimes we all just need a swig of diet coke and a $1,000 Herve Ledger dress to turn our frowns upside down.