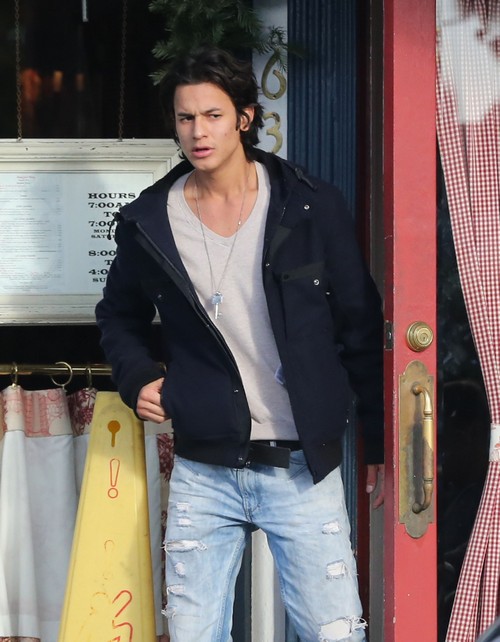 A Twilight Saga actor was arrested yesterday at LAX airport, but it wasn’t one of the holy trinity (Rob Pattinson, Kristen Stewart, and Taylor Lautner).  No, it was a member of the wolf pack instead.  Bronson Pelletier was initially approached by cops after a complaint was made about an unruly passenger and was subsequently removed from the aircraft.  He was instructed to wait for another flight since he was a little too tipsy to leave on the first one.  The cops left Bronson to wait for the flight, but not 2 hours later were they called back about someone urinating by the gate.  Poor Bronson was popped for taking a tinkle winkle at the airport and cited for public intoxication.

Had Mr. Pelletier used his wolf senses he would have been able to locate a restroom to relieve himself like a human instead of out in the open like a wild animal.  TMZ is also reporting that just one week prior to his arrest Bronson was pinched again, but this time he was booked on meth and cocaine possession charges.  What?!

Yup, the lone wolf was causing a ruckus in West Hollywood at Gym Bar on December 8, causing the patrons to feel uncomfortable and forcing the establishment to notify the authorities.  Once he was given a cavity search (ok, it was really just a pat down) the police found meth and cocaine on his person.

Someone sure is being a little drama queen about not making the big bucks like his co-stars.  So is that what you’re resorting to Bronson?  Coke and meth to numb the pain?  Dude, go out and audition for a new job and grow up.  Not everyone is going to hire you, but it beats embarrassing yourself by putting your addictions out in the open like that.

What do you think CDL readers?  Will Bronson be able to pick up the pieces and join the acting world once again or is he a one hit wonder and headed for skid row?