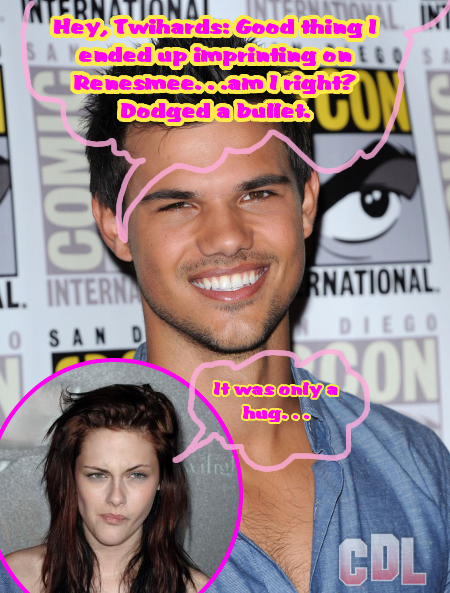 We haven’t heard much from Taylor Lautner since Kristen Stewart decided to publicly apologize for having an affair with Rupert Sanders, but a source close to the big bad Twilight werewolf is saying that he’s absolutely disgusted with the entire scandal. While Lautner and the Breaking Dawn cast were given explicit instructions to keep their mouths shut and to not get involved (or issue any statements on the matter), word has gotten around that Taylor is quite distraught over this debacle — one of the hottest scandals to hit Hollywood in a while.

A source close to the actor released this quote, which is quickly beginning its journey around the web like wildfire: “He looked up to her. He’s dealing with it in a businesslike way because it’s easier for him.”

To some, those words might not reveal much. But to us? Those words mean that Taylor is done with K-Stew. Maybe forever. It’s quite apparent that Taylor empathizes with Robert Pattinson and would, if the time came, take Rob’s side if it ever came down to choosing one friend over the other. While I think the relationship between Taylor Lautner and Kristen Stewart has been severed, there’s always the possibility of them joining up in the future. What do you think? Do you think Kristen Stewart is aware of how disgusted Taylor is with her? Is her awkward self totally oblivious?  Will time heal their botched friendship? We’re eager to find out.

Yesterday, I asked readers to take a poll asking whether or not they still thought Rupert and Kristen Stewart are in love. I got lots of responses and, while a few of you think vampire love is eternal and can never truly be broken, many readers are split down the middle between OMG hellz to the YES they ARE still in love and OMG hellz to the NO they’re NOT still in love. It’s basically a tie right now, with “yes” being ahead by a few votes. While the scandal’s still hot, there’s still time for you to cast your vote!  The Kristen Stewart and Rupert Sanders affair: True love? Fling? or just a road bump in true fangy fangtastic vampire love?