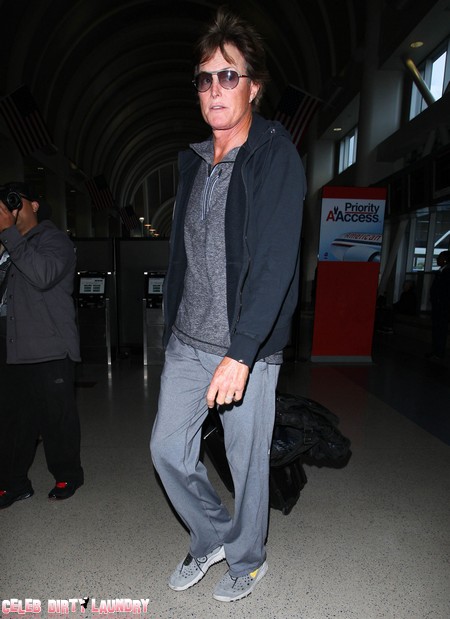 Bruce Jenner said that he is not very pleased with his step-daughter Kim Kardashian’s decision to hook up with rapper Kanye West.  Bruce made it clear during a speaking engagement in Boston that he ‘not that excited’ about Kim’s new relationship – he didn’t mention how his wife, momanager Kris Jenner felt.

While Bruce was speaking at Northeastern University Wednesday evening someone in the audience asked him what he thought about his stepdaughter’s new relationship.  Bruce said: “I’m not that excited, but we’ll see. Kimberly and I have had a conversation about them and their potential relationship.”

Bruce has been having problems with his own marriage recently and has threatened to leave Kris Jenner.  The problem is that Bruce feels Kris is pimping out his daughters, Kendall and Kylie, and turning them into famewhores.  Bruce doesn’t want to see his babies turned into ‘hypersexualized reality starlets’ like Kris’s other daughters Kim, Kourtney, and Khloe.

Sources close to the Kardashian/Jenner clan have said that Bruce is concerned about Kim rushing into another relationship so soon after her debacle with estranged husband Kris Humphries.  I guess since their marriage problems began his wife is not keeping him in the loop on the family’s reality TV show plans…

TMZ has the exclusive:  Kanye West has his work cut out for him … ’cause Kim Kardashian‘s step-father Bruce Jenner has made it clear … he’s “not that excited” about Kim’s new relationship.

Bruce made his feelings known during a speaking engagement at Northeastern University in Boston Wednesday night … when someone in the crowd asked for his opinion on the new K+K hookup.   Jenner told the audience … “I’m not that excited, but we’ll see. Kimberly and I have had a conversation about them and their potential relationship.”

Bruce’s feelings aren’t personal against Kanye as according to sources he likes the rapper but he wants Kim to proceed cautiously with any new relationship.  Sounds like good fatherly advice.  What do you think?  Is Kim wise to be getting serious so quickly with Kanye?  Do you think that Kim has been in a relationship with Kanye for longer than we know?  Let us know in the comments below.