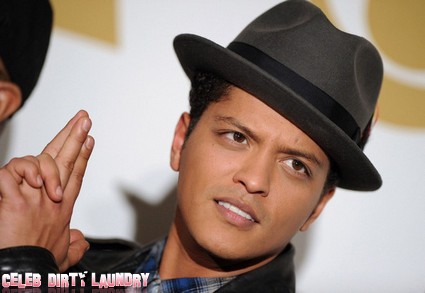 It pays to have good lawyers, just ask Bruno Mars. Mars, the part-time coke head, is getting a clean criminal record even though he pled guilty to cocaine possession! Now that is a nice trick – celebrity justice lives on.

Mars was arrested in 2010 at the Hard Rock Hotel and Casino in Vegas after a bathroom attendant told security that he was snorting coke in one of the stalls.

Mars pled guilty, but in a fancy deal, usually reserved for the rich and famous, he was not convicted. The judge deferred the matter and gave him a year to complete 200 hours of community service and attend drug education classes. Wow – now Mars knows how bad drugs are… what a stupid farce!

TMZ reports:  Mars has exceeded the number of required community service hours doing more than 230 hours and working for children’s charities as well as some health-related charities. And he has completed his classes.
Bruno Mars will have a spotless criminal record tomorrow … because sources tell us the judge in his cocaine possession case will officially dismiss the charge.

Tomorrow Mar’s lawyer, Blair Berk, will go to court and have his charge dismissed – it will cease to exist – and history will be rewritten to make it appear as though the incident never occurred.

Anyone who has read ‘1984’ knows that history is what the authorities say it is… .