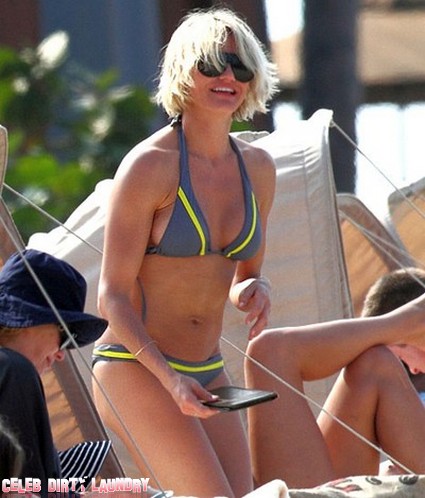 Cameron Diaz has been hitting the beach in Hawaii. The star of Bad Teacher tuned heads as she enjoyed some fun in the sun over the New Year. She may be turning 40 in 2012 but she still knows how to rock a bikini.

The actress also debuted a shorter hairstyle. She had her locks cut in November. But has now decided to go even shorter with a shaggy bob reminiscent of her Something About Mary days. The updated look making her look even younger.

Of course Cameron’s stunning display on the sand may be more about payback than anything else. She was making waves while ex boyfriend Alex Rodriguez was going public with his new girl in Mexico. Nothing like a bit of publicity to show your former flame what he’s missing.

Cam has said her body is improving with the years. ‘The more I work on my body at this age, the better it gets. I feel so much more attractive now. A thousand percent. I’m appreciating my skin and my wrinkles and all those things.’

It was all about having fun for Ms Diaz on her vacation. She partied with friends. The 39 year old even swam with dolphins. On and off close friend P Diddy was nowhere to be seen.

We’ll see Cam on the big screen in May in the much anticipated What To Expect When You’re Expecting. She stars alongside  Jennifer Lopez, Brooklyn Decker, Elizabeth Banks and Chace Crawford. The one time model plays Jules – an aspiring singer and fitness show host in the movie.