Cameron Diaz Wants Larger Breasts And She Had Them! (Photo)

Cameron Diaz is always game for changing her appearance and the celeb was apparently very proud of the large fake “big boobs” she had to wear for her role in ‘What to Expect When You’re Expecting.’ This fits right in with Cameron’s adoration and extensive use of plastic surgery which has backfired badly.  Of course Cameron has had so much cosmetic surgery that she bears little resemblance to her former self.

Cameron had to wear a prosthetic chest for her role in the movie and her co-star Matthew Morrison says she couldn’t stop herself from showing off her larger-than-life chest. 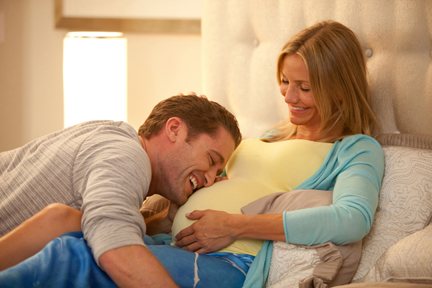 Matthew said: “There was this one scene that got cut out – Cameron shows me her breasts! They were fake breasts of course, because her character was pregnant, so they made hers bigger.”

“She was walking round with her shirt open all day on set though, loving her big boobs.”

While Matthew loved working with Cameron, he admits he was overwhelmed when he saw how toned her physique was when they had to work on a dance scene together.

He told More!: “Cameron is exactly like you’d expect. So lively and energetic – she always had a smile on her face and was cracking jokes left, right and center. I had a great time with her.”

“We do this dance scene in the movie and I learned the routine in Los Angeles and she learned it in New York, so we only had one day of rehearsal together.”

“I didn’t know what outfit she was going to be wearing though and when I saw it for the first time, I was like, ‘Excuse me?!’ Her body was just… wow. I did some sit-ups after that.”

Can we expect Cameron to indulge herself in yet more cosmetic surgery – is a breast augmentation next?