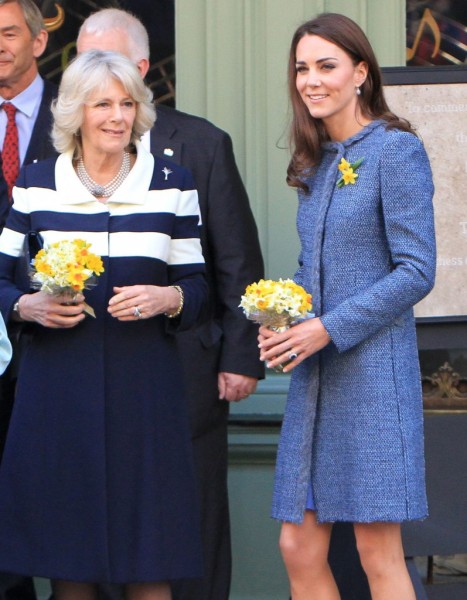 Will the little heir call Camilla Parker-Bowles grandma? For some reason a lot of people are worried about that day. It was perfectly fine for Princes William and Harry to accept this woman for the love of their father and the stability of their family but it’s not so fine for Princess Diana’s grandchild to call that third woman in her failed marriage grandma – especially while Carole Middleton’s around.

The Daily Mail already has an interesting piece today pitting Camilla Parker-Bowles and Carole Middleton up against each other as they fight for the attentions and love of Kate Middleton’s baby. In Camilla’s case, she’s also fighting to boss Kate around the most. Apparently she likes doing that and Kate, being new and always ready to please, has so far allowed her to do so. Will a baby, which no doubt will solidify Kate’s place in the royal family, strengthen that bond or toughen Kate up? Camilla’s not going anywhere for a very long time so I’d go with the former.

But when she took Kate to lunch before her wedding — using her own credit card to pay the bill — she chose to do so as publicly as possible. The pair were spotted at Koffman’s, a French restaurant in the Berkeley Hotel in Knightsbridge. It was clear to fellow diners that the Duchess of Cornwall was giving Catherine (as she calls her) advice, and quite loudly.

In palace circles this was seen as a deliberate display to the world of just how well she gets on with Diana’s children. But the arrival of a grandchild is a much more sensitive matter. Camilla is likely to want the Duke and Duchess of Cambridge and their new baby to join her own children and grandchildren at their regular gatherings at Raymill House, the Wiltshire country home she refused to give up after marrying Charles.

‘Camilla’s not a fool,’ says one of her circle. ‘She knows she mustn’t try to be too involved with the new baby. But it won’t be easy. She and Kate are close, and she does like giving advice’….

‘Carole will want to be able to give as much guidance to Catherine as any other mother,’ says a family friend. ‘She is well aware of the demands that the Palace will make, and some of the things they will insist on, but she knows William will defend their right to have a say.’

Did you know Camilla used to refer to the Middletons as The Fockers when Kate and William first started dating? That’s actually pretty funny. And she’s referred to Carole as “very lively” and I’m not sure if that’s a compliment or not. The article goes on to compare the women’s ruthless ambition since Carole must be a manipulative shrew for having the gall to start a business from scratch and become a millionaire. It’s odd how that’s directly comparable to having the gall to cheat on your husband with a married prince in Camilla’s case.

But although it does seem that Camilla’s got the grandma job securely fastened since she’s sleeping with the future King, insiders suggest that Kate is still very dependent on her family which is unprecedented in the royal family. There is usually no place for in-laws but because William likes them so much and knows how much Kate needs them, he’s made a special place for them in their lives. They knew about the baby before anyone else! And apparently Kate goes home to Berkshire to hang out and unwind more than anyone knows. So I doubt Carole will let Camilla take the primary grandma role over her.

It makes for a good story though and one I’m sure we’ll be hearing a lot about in the future. Camilla Parker-Bowles and Carole Middleton fight over first birthday party decorations! It’ll be interesting to see who the people back. Camilla is still one of the least favorite royals but Carole Middleton’s considered a social climbing schemer. Who do you see winning the popularity brawl?