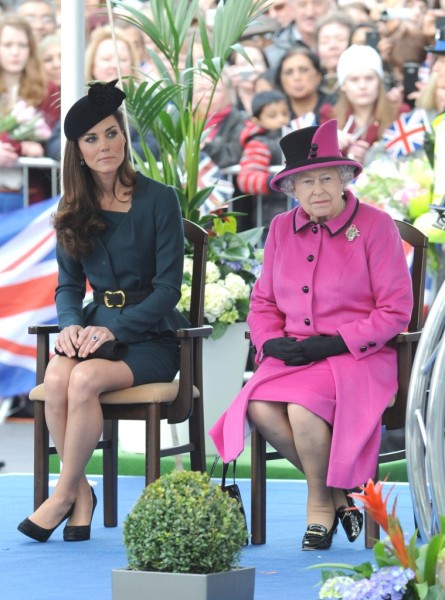 The royal family is said to be delighted with the news of Kate Middleton’s pregnancy but could they be nursing sore egos today over the fact that those common, middle class Middletons knew about the royal heir even before they did? Damn those Middletons! Their quest for dominance knows no bounds!

I think a lot of us were a little surprised when it was announced that Kate and William had not even told Queen Elizabeth or Prince Charles about the baby before the decision was made to take Kate to the hospital for her sickness. And even then they were only told because William knew he had to go public. The Daily Mail wrote, “The sources told MailOnline that the couple initially had ‘no plans whatsoever’ to announce the pregnancy until after she had had her 12-week scan. They also revealed that the Duke and Duchess had not planned to tell the Royal Family of their news until they were all gathered together at Sandringham at Christmas. But in view of the Duchess’s hospitalisation the couple made the ‘reluctant and difficult’ decision to publicly confirm their news. Members of the Royal Family – including the Queen and grandfather-to-be Prince Charles – were informed less than an hour before the statement was put out at 4pm yesterday.”

Kate was staying with her parents at the time in Berkshire and it’s been said she told them and Pippa while she was there before she fell ill. I get that the royal couple wanted to wait until Christmas at Sandringham to share the news with the royal family but do you think they feel a little slighted? Should the monarch be the first to know about the coming of a future monarch? And I have to cry bullshit on those who think Kate and William didn’t tell Carole Middleton until Kate was too sick to disguise it. It’s her mother! She probably told her the second that pregnancy stick read two lines. And it’s not like Carole didn’t know anyway. Kate’s face ballooned to twice it’s size. Steve Wonder saw what was going down.

I have to imagine there’s a little friction going on in the very tense St. James Palace this morning. The Queen does not like unwarranted attention and the surprises that create it. William took the reigns on this one. He choose to take Kate to the hospital and seemingly filled everyone else in on the way. William is continuing his streak of independence in the royal family. He might get slapped on the wrist for it by Granny. Also, the Queen is no fan of weakness. I understand that Kate’s going through something that’s not so pretty right now but could the Queen look at all of this as William unnecessarily coddling his wife? Couldn’t this all be done at Kensington without all the press and people waiting outside the hospital? Could you see Queen Elizabeth upset by all the commotion or is she just “delighted” the family is getting attention for something other than naked body parts?