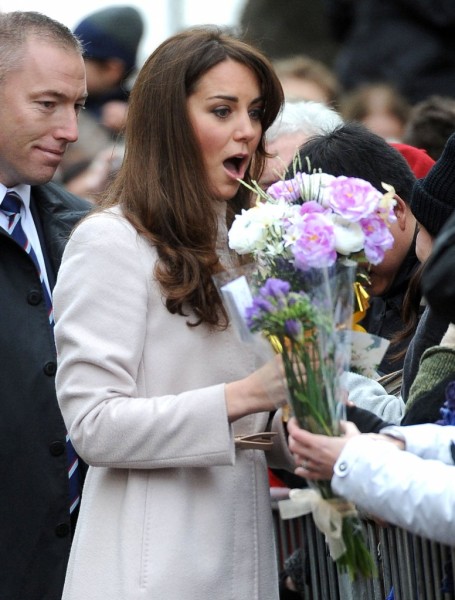 I have to admit, the more the hype surrounding Kate Middleton’s uterus continues to grow the more I’m beginning to entertain the possibility of an heir. The signs are ridiculous… but there are more and more of them. Will we get that Christmas miracle announcement after all?

Tom Sykes at the Daily Beast seems to think so. He came up with a list of the newest most compelling signs that a Kate Middleton baby is on the way. Two of his most compelling arguments are the most visible – the face and the hair. Everyone’s noticed how Kate’s face as filled out over the last month and the tabloids are arguing that her famous fringe haircut is really a distraction technique to get us off the trail. Did it work? Ah no. It just made her face look fuller. Add to all this the fact that Prince William might quit his job soon and permanently move to Kensington Palace  filling it with “Daddy’s Little Co-Pilot” outfits and the baby’s as good as here already.

Are you convinced? I’m almost there. Again, the face could be fuller because she’s trying to get healthy for an upcoming baby and William could have accepted the baby gift because it was the polite thing to do on the spot. The hair? Well, she had to do something different with that mop of hers.

The most compelling evidence to me is that a source tipped the Daily Beast off a couple months ago about Kate Middleton’s pregnancy but said the couple wouldn’t come forward until they absolutely had to which means Kate’s not going to talk until her belly can do it for her.

So… do you believe Kate Middleton’s pregnant? Are all these little signs just coincidences or taken as a whole are they good as gospel? I STILL have doubts. I heard they had to wait until the malaria pills they took for their tour had run their course which means Kate couldn’t have been pregnant on the tour when she refused to drink wine. So I’m gonna wait – not very patiently – because I’m still not sold. The haircut was probably a distraction. It’s almost like Kate’s people knew there wasn’t a bun in the oven so they threw us a bone with the hair – something to talk about other than a royal baby. I’m shallow but it won’t entertain me for long!