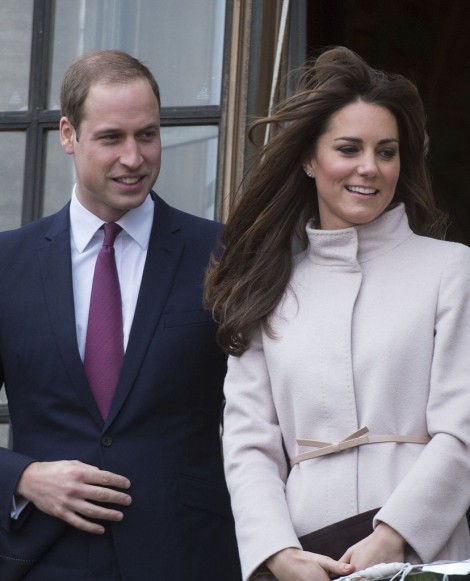 Prince William accepted a baby gift! Did he just let everyone in on the worst kept secret of the year?

While on their trip to Cambridge yesterday, the Cambridges did their routine walkabout, shaking hands with the fans before going on to other royal things. It’s nothing new for people to want to give them things – flowers, etc. but it is new for William to actually accept them.

According to the Daily Mirror, a woman handed William a baby outfit with the words “Daddy’s little co-pilot” and instead of laughing, thanking her and politely moving on, William said, “I’ll keep that thanks.”

Now, it was a really cute present and William probably just couldn’t help himself. He is a helicopter pilot and he will have a kid sooner or later. But… the Cambridges are resolute about never accepting gifts from people. Could this be the big clue to a pregnant Kate Middleton? Kate also tickled a baby’s foot while she was there which means she’ll make a great mother.

I don’t know about this. Something feels strange but something always feels strange with Will and Kate. It’s certainly the right time for a baby. The summer of naked scandals is still fresh in everyone’s minds. But I don’t see any signs of bump. People say Kate’s face has filled out but she could just be relaxing on all that exercising and dieting to get her body ready for baby. So as usual I’m unsure. Though we can be sure if she isn’t pregnant now then she will be soon. William is said to be quitting his job with the RAF and all these appearances only encourage the idea that the two will be full-time working royals soon. Babies are just the next step. They proved their point by waiting. William wanted the world to know that he’s his own man and will do things at his own time and Kate wanted to prove she was a modern woman who can have kids in her thirties. It’s all a part of the plan.

Are your eyebrows raised? Prince William accepts a baby gift so a baby must be on the way?