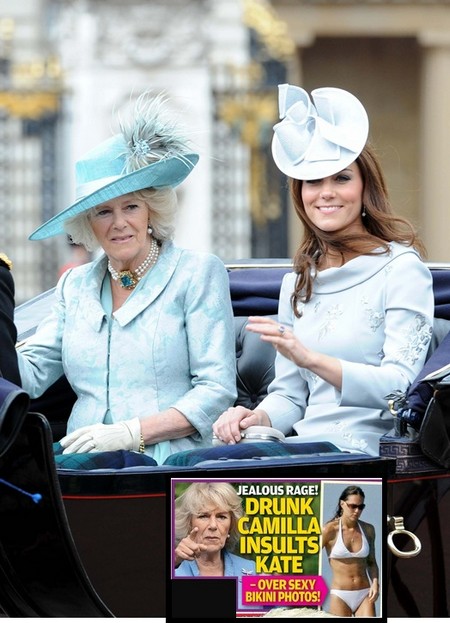 It seems Kate Middleton and Prince William weren’t the only ones outraged when pictures of their bikini-clad bodies were plastered on the cover of an Australian magazine earlier this month. Kate’s stepmother-in-law, Camilla Parker-Bowles, couldn’t keep her disgust and jealousy to herself and insulted the people’s true princess over her sexy spread.

This is just another in a series of Camilla hating on Kate events. There’s been no love lost between the women especially as Camilla continues to torment Kate over her demoted state in the curtsy line and the fact that Camilla will actually become Queen before Kate has her chance. The two and their royal husbands virtually came to blows last week when Camilla invited herself over to Kate and Will’s pad in an effort to catch Kate and her common sensibilities off guard. Prince William was said to have been livid over Camilla’s unroyal and unruly behavior.

Perhaps Camilla has to ease up on the hard stuff? Globe magazine is all about calling Camilla out on her drunken shenanigans. Because it seems like when Camilla’s boozin’, she starts looking to poke a little fun at Kate. Such is the case with the honeymoon photos. In defense of the Duchess of Cambridge, her black bikini was modest by normal girls’ standards and she didn’t think she was being photographed. Kate and Wills were supposed to have the whole island to themselves without the prying eyes of the paparazzi. But that’s not stopping Camilla. She rained her hate down on Kate over the slutty images. I’m guessing she probably made some “too skinny” comments as well since that’s what everyone’s been thinking and Camilla knows the eating disorder allegations get under Kate’s skin.

Is this Camilla’s lowest blow? What is her problem? She’s got the crown wrapped around her fingers. There’s no one standing in between her and becoming Queen. And Kate is too easy. She’s young and green and so insecure in her role with the firm. Camilla battled Princess Diana as well as her hallowed memory and she’s firmly implanted. She knows how to play the game.

Should Kate start fighting back or do you think she should keep her distance and her dignity away from Camilla Parker-Bowles?