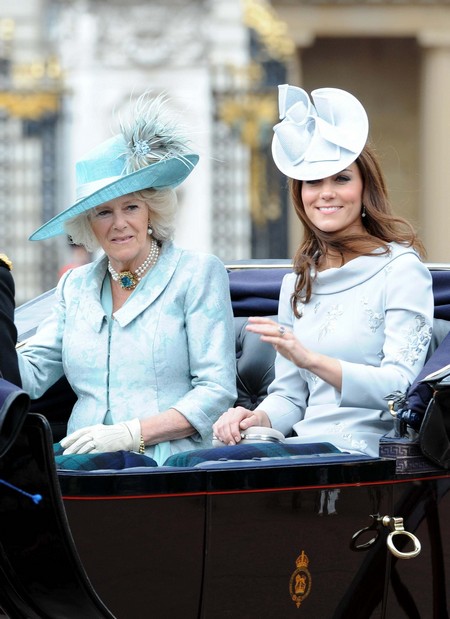 Prince Charles and Prince William may be father and son but their wives already hate each other and this latest barb makes matters even worse.  Camilla encountered Kate in a palace corridor just after the ‘curtsy decree’ was announced and felt that Kate must curtsy to her.  Camilla said: ‘You must curtsy to me – right now!’  But Kate fired right back at crazy Camilla ‘Never! You make me sick!’

Queen Elizabeth II recently ordained that Kate must curtsy before blood royals such as Princess Beatrice and Princess Eugenie whenever Prince William is not around.  The reasons for this decree are ostensibly based on the royal ranking system which places blood royals above those who enter the Royal Family through marriage.  However the truth is that many senior royals are in a jealous snit over Kate’s success and popularity – especially her preferential placement right beside the Queen at major events during the Diamond Jubilee celebrations.  So Queen Elizabeth offered up a ‘curtsy cure’ to placate the envious royals – Kate might be much more important – she will mother the future monarch – and much more popular than these entitled but useless senior royals – but they will make sure she knows that her place is beneath them for as long as possible.

Enter evil Camilla – Prince Charles’ half-mad wife… Camilla is not a blood royal but since she is married to the current heir she ranks above Kate.  Camilla is burning with rage since learning that Charles is paying for Kate’s expensive designer wardrobe.  According to a source:  “Word is all the beautiful clothes that have made Kate a fashion icon have been paid for by Charles – to the tune of more than $54,000 so far this year,” the insider says.  “Camilla hit the roof.  She raged that Charles had no business helping the ‘upstart’ show her up in public. She demanded he double her allowance for her designer working clothes and slash Kate’s by half.”  No doubt Camilla will try to have Kate curtsying on command like a trained animal – and no doubt Kate will resist!

GLOBE Print Edition, July 16 has the scoop on the palace gossip.

Prince William’s beautiful wife Kate is locked in a new war with her evil royal rival Camilla Parker Bowles after she was ordered to follow a set of new palace rules-and curtsy to her mother-in-law in public!

The new instructions were circulated to all royal households. They mean that Kate has to curtsy even to minor royals like. Princess Beatrice and Eugenie the daughters of Prince Andrew and his ex-wife, Fergie the Duchess of York, because they are descended from the direct royal bloodline.

Though Camilla is a non-Royal divorcee, her husband is the Prince of Wales and the designated heir to the throne ahead of his eldest son William. This means she outranks gorgeous Kate, who comes from common stock.

Says GLOBE’s source, “curtsying is a throwback to a long gone era, but in the palace it carries prestige and Camilla is milking her position to put one over on Kate every chance she gets.”

The world watches Kate as if she were the most celebrated Hollywood star and the media report on every detail of her existence.  Meanwhile, back in their palaces the jealous royals continue to play their silly game. It doesn’t matter – Kate is the best – she will win.  Just wait until her pregnancy is announced.  Expect it to be soon!