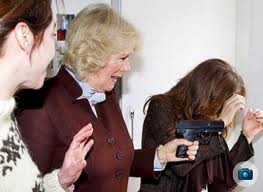 Prince Charles fears that his wife, Camilla Parker Bowles, the Duchess of Cornwall, is mentally ill and needs to be locked away in a psychiatric hospital!  Eyewitnesses attest to the fact that Camilla’s behavior has deteriorated recently and often appears to be psychotic.  Camilla seems to be losing her fragile grip on reality ever since she realized that she will never achieve her dream of sitting on the throne.  Queen Elizabeth II has supposedly decided that Charles’ son, Prince William, will succeed her and that means Kate Middleton will get what Camilla has always wanted.

The Globe Print Edition, April 16 tells how Camilla stunned VIP’s on the set of her favorite TV drama, The Killing, when she and Charles visited the Danish royal family in Copenhagen last month.  Camilla insisted on visiting the film set where she grabbed a prop gun and turned it on startled onlookers and sprayed them with imaginary bullets!  Laughing hysterically Camilla screamed: “You’re all dead – so lie down.”  She even turned the automatic revolver on Denmark’s Crown Princess Mary who ‘reacted with horror covering her face in fear and ducking down!’

Charles had left crazy Camilla alone while he toured another part of the city and freaked out when he heard about her crazy behavior at the studio.  Sources say that Charles immediately feared that Camilla was heading for another emotional breakdown and ordered aides not to leave her side.

RELATED: Prince Charles And Camilla Parker Bowles Are Getting A Divorce (Photo)

The GLOBE claims that Camilla and Charles have secretly split and are living separate lives.  Camilla has allegedly accepted a $50,000,000 payment to pretend that everything is okay until after the Queen’s Diamond Jubilee this summer.  Sadly, Camilla is having great difficulty holding it together as her behavior in Denmark indicates.

According to a GLOBE source: “Charles has been telling people Camilla is ‘nuts.’”

GLOBE says that this is not the first time that Camilla has gone wacky. In September 2008, Camilla had a severe emotional breakdown and Charles attempted to have her committed to a psychiatric hospital.

Altogether this is a sad story of mental illness taking a firm hold of Camilla.  What will be the outcome?  Hopefully Camilla’s condition will improve and we will see her well.