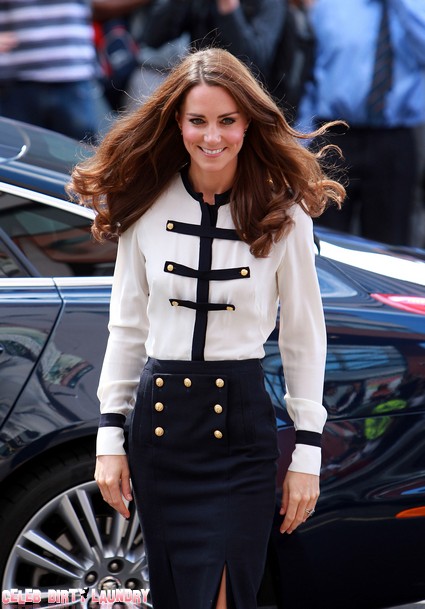 Kate Middleton has made a great impression upon Prince William‘s grandmother, Britain’s Queen Elizabeth II and the monarch is talking about it. For a new royal like the Duchess of Cambridge there is nobody better to impress than the Queen herself. As the Queen prepares for her Diamond Jubilee celebration she has expressed her approval and fondness for Kate.

At 85-years-old the Queen has seen it all – scandals and bad press for the royal family. From her uncle, Prince Edward VIII who chose to abdicate the throne over divorcee, Wallis Simpson, to her own son, Prince Charles, to her late daughter-in-law, Lady Diana, Elizabeth has faced some tough times. So when we hear that the Queen has “grown very fond” of Kate we have no trouble believing it.

Kate is stepping up to plate and will be assuming some independent functions while Prince William is serving in the Falklands.

A royal insider said: “So far, Catherine has shown herself to be more than willing and more than capable. She is humble and keen to learn and the queen likes that. She has grown very fond of her and understands the impact she is having on the public.”

“There is a feeling that Catherine and William are doing the right thing in the queen’s eyes by not taking on too much so they can be fully involved with the charities they do support. And she is impressed by Catherine’s clear sense of direction about what kind of causes she is interested in.”

Queen Elizabeth – who celebrates 60 years on the throne next week – was reportedly “touched” by the public reaction to last year’s royal wedding, and is happy to let Catherine “take things at her own pace” as she settles in to her new life as a member of the royal family.

The source added to the Daily Mirror newspaper: “The queen was so happy on the wedding day, she was practically skipping. Seeing her family full of joy but also seeing the public support and excitement touched her greatly.”

“She was very supportive of William and Catherine leading up to the wedding and nothing could have reaffirmed more that they have the potential to achieve great things for the monarchy. The whole of Britain seemed to have turned up to wish them well.”

“There is a definite feeling of wanting to give Catherine time to get used to her royal life rather than thrust her in at the deep end and say, ‘OK, off you go’. The queen supports the idea she should be allowed to take things at her own pace.”

Good for Kate – she is great and we support her.