Prince Charles and Camilla Parker Bowles Are Getting A Divorce (Photo) 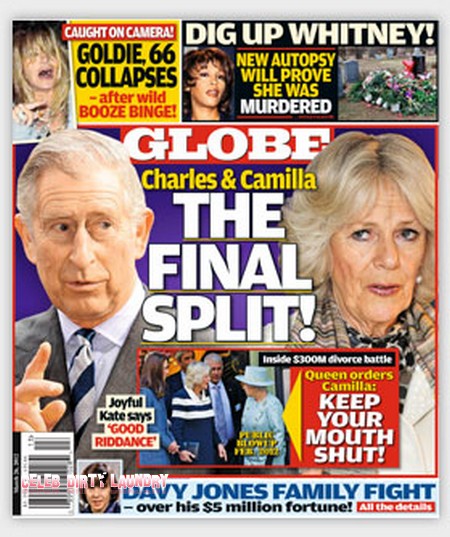 The March 26th issue of Globe Magazine features the cover story ‘Charles and Camilla – The Final Split.’  Globe magazine once again feeds the rumors that Prince’s Charles and his wife, Camilla Parker Bowles‘ are headed for a divorce. Charles and Camilla have been romantically linked since Charles was married to the late Princess Diana. If the divorce rumors are true, the couple will have to divide a fortune of 300 million dollars.

Globe has the scoop: In a world exclusive, GLOBE can reveal that Prince Charles and his scheming wife Camilla have finally split after seven years of marriage. And in a bombshell revelation, we’ve learned that Queen Elizabeth is involved in the top-secret divorce deal after a public spat with Camilla. Find out the shocking details – and why William’s bride Kate is thrilled – only in the new GLOBE.

Although Globe carried this same story in June 2011 they claim this time they have all the information inside the divorce.  How Prince William’s wife Kate Middleton is glad to see Camilla go and how the Queen has places a gag order on the couple.  The last thing she wants is all their dirty laundry to be made public.

So there you have the story!  What do you think are Charles and Camilla finally headed for the divorce courts?  Is this just more groundless speculation by Globe?  Can Charles and Camilla keep a lid on it?  Sound out in the comments below and let us know what you think!