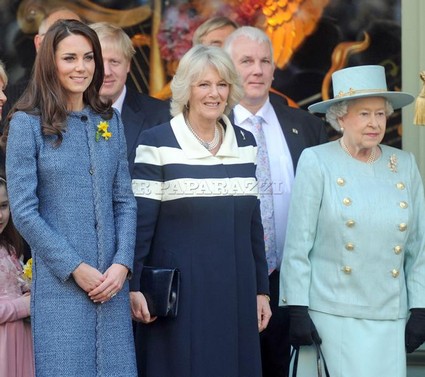 So far Kate has acquitted herself flawlessly in William’s absence, earning praise for her unpretentious yet dignified public appearances. Queen Elizabeth II is said to be very pleased with her grandson’s match and even pitched in to help train Kate for her formal duties. As we have said before, the Queen has simply got to be overjoyed that there is finally a future queen on the horizon who is not scandal prone! Prince Charles and his first wife, Lady Diana Spencer, were a nightmare – with public exposure of affairs and infidelity and eventually divorce. Now with sober William the likely heir to the throne Kate’s impeccable behavior is so important.

Although it was the trio’s first official public duty performed en masse — part of the Diamond Jubilee schedule, celebrating the Queen’s 50th year on the throne — Kate, 30, Camilla, 64, and Elizabeth, 85, were like three girls in, well, a candy store!

A source inside the shop reveals that Kate went straight to the chocolate counter (which she called “the naughty counter”) in the newly-restored food hall and confessed to the staff, “Oh, I love chocolate. Yes. I think most girls like chocolate”

Prince Charles’ wife Camilla, meanwhile, tucked into a bag of gourmet jelly beans nearby. “What a treat!” she cooed.

Queen Elizabeth, however, abstained from all sweets during the visit — but did join a tea party at the store with 150 staff members, and checked out a cake to commemorating the renaming of the store restaurant to The Diamond Jubilee Tea Station.

Is Kate a great as she seems, never arrogant and always classy. What do you think of the future Queen of England? Sound off in the comments below.