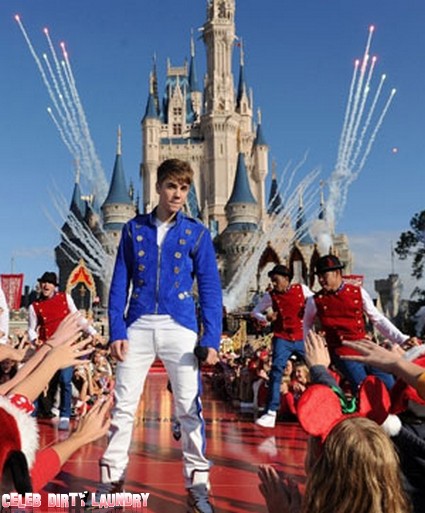 Justin Bieber and Selena Gomez‘s recent day out at Disneyland has ended up on YouTube for all the wrong reasons. The tween hearthrob flipped a couple of teenage girls the bird and then yelled out an expletive deletive at the pair. Not the nicest way to treat your fans!

The Biebs and his girlfriend visited the California theme park on Valentine’s Day. They were keeping a low profile, checking out the rides and stealing a few kisses along the way. His younger brother and sister were also tagging along. Justin may have wanted a day off from super stardom but it doesn’t work that way when you’re the hottest pop star on the planet. Unless you don a Michael Jackson type disguise people are going to recognize you at one of the most popular places in the US. And that’s what happened…

Justin and Selena were spotted while in a car on a ride. He saw two girls filming him and attempting to take pictures. On the video – which is now gone viral – the singer can be heard yelling ‘stop it please’ while Selena covers her face. He then gets really annoyed and screams ‘f*** you‘ at the girls and flips them the bird. Only trouble for Justin is – they got it all on video and uploaded it straight to You Tube!

It’s not the first time he’s let rip with a rude gesture. Check out Justin Bieber Flips The Bird At Paparazzi In London (Photo) That was at photographers…but this was at fans! They buy his CDs, go to his movie and devour the merchandise that’s making him a star. Maybe he needs to chill out. He’ll need every fan he can get when the next Bieber comes along and he’s yesterday’s news.

Here’s the video. What do you reckon? Did two fans really deserve what they got?