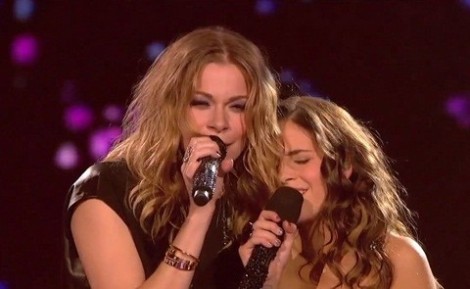 Things continue to get out of control in the silliest way for X-Factor loser Carly Rose Sonenclar and her duet partner/alleged anorexic/alleged laxative junkie LeAnn Rimes. Whoever thought it would be a great idea to put that hot mess on stage after the last week few weeks she’s had?

Anyway, the saga continues and it appears Carly Rose’s family is not too stoked about the way LeAnn is throwing their little girl’s performance under the bus. LeAnn told TMZ that the duet was so awkward (and she took over the whole performance) because Carly Rose was having a tough time hitting the high notes. LeAnn has since backtracked but TMZ swears her publicist gave the quote.

Well now Carly Rose’s family can’t take defeat and humiliation in the same day because they’re fighting back saying that LeAnn’s just mad because Carly Rose out-sang and made her look like a drunk, wobbling Thanksgiving turkey reject on stage (I added that last part). The 13-year-old was nothing but a pro. I’ll buy that but it doesn’t take Beyonce to look like a pro when LeAnn’s around. She was a straight up mess on that stage.

But did she cost Carly Rose the win? I’ll admit, I only saw Carly’s performance but, from what I saw, she wasn’t that great. I’m not sure if she sang other songs for the finale but if How Do I Live was it then she should slap someone for giving her a song she couldn’t pull off. Now, LeAnn didn’t help things but she probably was the final nail in the coffin it looks like she crawled out of to make it to the stage.

What do you think of the Carly Rose Sonenclar/LeAnn Rimes controversy? Is LeAnn trying to cover her drunken tracks or was Carly Rose really just out of her element? Should LeAnn Rimes blame a 13-year-old and hold her accountable for her singing?