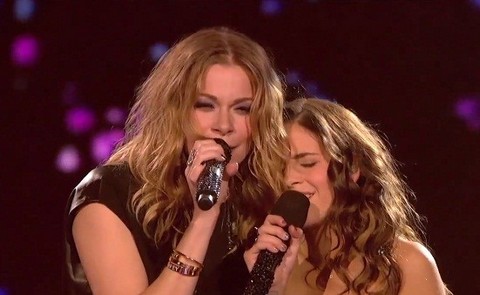 Last night, on the X-Factor USA’s finale, LeAnn Rimes did a duet with vocal prodigy Carly Rose Sonenclar. What was supposed to be a music extravaganza filled with tears and Simon Cowell’s Botox, turned into a weird affair straight from the halls of a David Lynch film – or Dreamgirls – whichever way you look at it. The great country star, Rimes, not only faltered like a Teletubby on crack during the song – and Carly had to save her blue buttocks we might add – but she also attempted to upstage the kid. Firstly, who tries to upstage a 13-year-old vocal Goddess? Secondly, who even cares what Rimes does? She is, after all, falling apart over her relationship with Eddie Cibrian and whatnot! Come to think of it, when last did Rimes do anything worthwhile except prance around on stage a la Silence of The Lambs’ naked man at the end?

Bitch, please. You might have been a superstar back in the days of Coyote Ugly and Piper Perabo’s sickening white smile, but today you’re merely given a passing thought by country music fans. In fact, Rimes is so outdated that we watched a “What Happened To?” television special the other night and spotted her mug on our HD Ready screen (we’re writers, not Microsoft creators!)

We digress. Not only did the song sound like a drunken Diane Warren – she wrote it – singing at a lounge club in Barbados, but it was also wrought with intense jealousy from Rimes’ side. Carly, on the other hand, was just chillin’ there and being all OMG-good and singing for her life, while witchy Rimes tried to upstage the young talent. If Rimes had not been paying attention throughout her Bette Midler-esque career, she should be informed that a duet – especially with an X-Factor Finalist – should be kept as subtle as possible. Instead of upstaging, she should have rather connected. Instead of being a jealous freak, she should have rather allowed Carly the opportunity to shine.

At the end of the X-Factor finale performance, Rimes said, “I love this girl so much, she is such an amazing talent.” Aw, we don’t know how we lived without Rimes for so long!

Erm, yeah, about that…