Caroline Manzo Quitting RHONJ If Theresa Giudice Is Not Fired 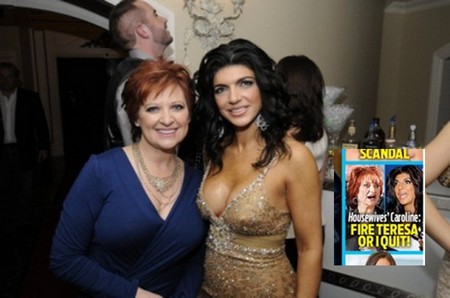 It seems fans of Real Housewives of New Jersey aren’t the only ones hating on Theresa Giudice.  The cover of this week’s issue of Reality Weekly claims that fellow cast member, Caroline Manzo is demanding that the hot-headed Italian be fired pronto.  It seems all of the ladies have grown tired of the drama that comes along with Theresa – and none of it is ever the least bit positive.

She claims to be all about family but her treatment of sister-in-law, Melissa Gorga, tells a different story.  Her recent fight on camera made even the most non-violent of viewers wants to see a brick hit her in the face.  She rips apart other cast members at a moments notice but remember that old saying about people in glass houses?  Her kids are living with a dad that is likely, “going away” and a mother that is a train wreck, but will be the first to wonder why they are all messed up in ten years.

The only think shocking about this cover story is that only Caroline is demanding she be fired!  Because truly, you know they’d all be happy to see her go!

Also in this issue is a story on the supposed in battling between Howie Mandel and Howard Stern on the set of America’s Got Talent.  Depending on who you listen to, there is either a world of jealousy brewing or it’s a lovefest.

Are you a Real Houswives fan?  Would you like to see Theresa axed or do you like the crazy that she brings?  Tell us in the comments below!