Casey Anthony Being Forced To Accept A $1 Million Interview 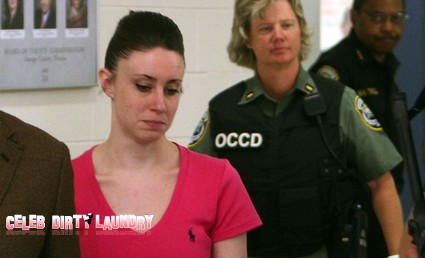 Casey Anthony might be legally forced to accept $1 million for an interview that she agreed to while still represented by Jose Baez. Baez dumped Casey recently, for reasons that are unclear, and murder mom is now represented by J. Cheney Mason. Now that Baez is out of the way a Florida law firm has swooped in to pursue the interview.

According to RadarOnline a Florida law firm representing a group of Hollywood producers is looking to revisit talks with murder mom for her first one-on-one interview… and they have a document in the form of a letter to Casey to prove it!

In the letter the firm of Cohen & Kuvin tells Casey’s new lawyer, J. Cheney Mason, that all sides had previously agreed to a $1 million deal before Baez forced Casey to pull out of it. The letter implies that Casey is obligated fulfill the agreement – which means giving the interview and getting the million bucks – and that they will be forced ‘to consider all methods of enforcing this agreement.’

To read the letter click here:  Radar adds: California-based producer Al Taylor — who’s worked on behalf of The Jerry Springer Show in the past — had previously been linked to a potential million dollar deal for a chat with the Florida native. (Springer has denied his show was involving in making any such offer to Anthony.)

In a tragic miscarriage of justice, Casey was found not guilty on charges of first-degree murder, aggravated manslaughter and aggravated child abuse in the 2008 death of her daughter Caylee. However murder mom was found guilty of check fraud and is currently on probation. No doubt that an interview with Casey would be watched by many millions of people.