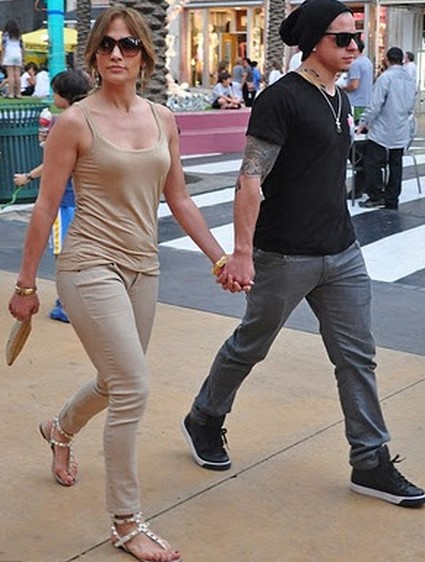 Jennifer Lopez is dating a toyboy in Casper Smart who was recently confused for her son.  Now Casper has valiantly taken to Twitter to defend his relationship with Jenn and to make sure everyone knows that she IS NOT his mother. We covered that earlier confusion here at Celeb Dirty Laundry when Jenn was not too pleased by the insinuations and comments that she was Casper’s mother. But when a 42 year-old mother of two chooses to bed a 24 year-old backup dancer with a criminal driving record what can she expect?

Casper tweeted: “Age, status, n opinions of others are irrelevant. Our hearts are endless and our souls infinite……….. To be continued. Our ages are mere reminders of the hours logged on this earth and the precious time remaining……… To be continued.”  “We should all honor our time here by indulging our passion and dreams. So, close your ears and open your hearts; Love and be happy!”

Jennifer then retweeted the philosopher’s comments.  Casper has taken to Twitter before to attempt to defend his relationship with Jennifer writing on Twitter: “I don’t understand how people can speak on other people or things they know nothing of??!!! #CRAZY. Off to Morocco!!!!”

Jennifer Lopez wants to have fun her way which is her right and privileged. Hollywood is loaded with celebs, mostly male, dating and marrying women less than 1/2 their age.