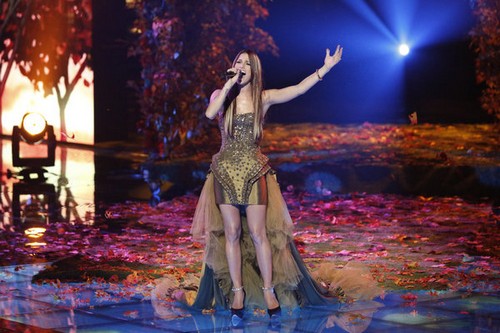 Cassadee Pope  took the stage tonight on THE VOICE’s FINALE for her duo performance. Cassadee sang “Here with Me”  by The Killers.  Cassadee sang the song with The Killers and Brandon Flowers for her duo performance.  On tonight’s show after weeks of grueling blind auditions, the battle rounds, the knock out rounds and the live shows the winner of THE VOICE season 3 will be crowned.   Did you miss tonight’s episode?  If you did we watched it and we recapped it here for you.

Carson announces Cassadee Pope singing Here With Me with The Killers. Brandon Flowers is on fire. His voice is smooth like cognac. But I keep wondering where she is. Finally, a couple of minutes in, she’s there – did they not want to share the stage or was she stuck in the toilet? The song was half over when she joined in! They sound nice together, but there was almost no Cassadee in the song…