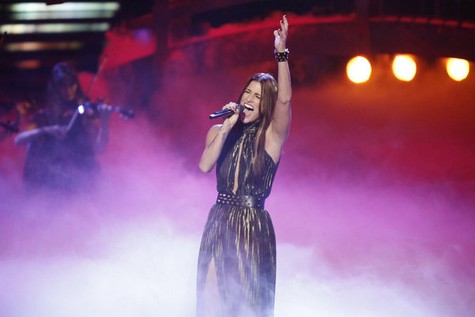 Cassadee Pope took the stage tonight on THE VOICE for her Semifinal performance.  Cassadee sang “Stupid Boy” by Keith Urban.  On tonight’s show the final 4 performed live in front of coaches Christina Aguilera, Adam Levine, CeeLo Green and Blake Shelton for America’s vote and a chance to move on to the finals.

On tonight’s show the remaining four contestants will be singing inspirational themes.  This week Cassadee went back to West Palm Beach Florida to visit her biggest supporters.  She went to her Mom’s house and saw her Mom, boyfriend and Uncle.  Having the support of her family means so much to her.  She went to a radio station she has been listening to since she was a kid.  She did a live performance and received a key to the city.  Did you miss tonight’s episode?  If you did we watched it and we recapped it here for you.   If you missed any of the performances, you can see all the videos here!

Judges Comments:  Christina “You know that I am a fan, your voice is always on point and perfect, there are a lot of artists that wish they could do that. Your passion brings your lyrics to life, you have a true super star on hand”. Blake “The reason that Cassadee did county songs on this show is because she connect with lyrics like nobody else”.

Singing a special song that was hand picked by Blake, Cassadee is singing “Stupid Boy”.  To vote for Cassadee Pope: 1-855-VOICE-03