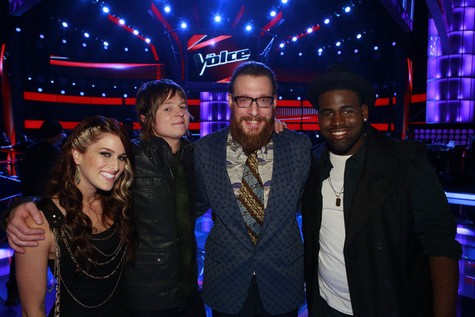 Tonight on NBC is a whole new episode of THE VOICE and the competition is really heating up.  Tonight the Semi-Finals begin and the top four artists will perform live in front of coaches Christina Aguilera, Adam Levine, CeeLo Green and Blake Shelton for America’s vote and a place in the Finals. Did you watch last week’s performance show? We did and we recapped it for you here!

During last Tuesday night’s elimination show, both Amanda Brown and Melanie Martinez were given the boot by the home audience. We were shocked by their elimination but we realized the votes are never cast for the best singer; they are, instead, cast for the most popular person and the contestant with the most interesting back story and/or archetype. The history of reality television almost always repeats itself, as fans of shows never really deviate from their set voting blocs.

On tonight’s show The Voice – Semi-Finals begin – the top four artists, Terry McDermott, Trevin Hunte, Cassadee Pope and Nicholas David will perform to try to get a place in the Finals.  Also Michel Bublé will team with artists for his new song “Christmas, Baby Please Come Home.”   Coach Blake Shelton will be joined by his team for a rendition of “White Christmas.”

Then on tomorrow’s show three of last season’s competitive artists will perform. Mann will sing his new hit “Roads” while Simms will offer her new song “Wild Child” and RaeLynn will perform her own new song in “Boyfriend.” In addition, the top four artists from the current cycle will be paired to perform duets on the December 11 show.

Tonight’s “Live Semi-Finals Performances” is going to be an exciting one, which you won’t want to miss. So be sure to tune in for our live coverage of NBC’s The Voice – tonight at 8PM EST!  While you wait for our recap, hit the comments and let us know what you have thought of Season 3 of The Voice, so far!

Tonight’s show: We are just one short week of finding out who will win The Voice, which means that your vote is more important than ever.

Performing first tonight is Trevin Hunte, but first we get a glimpse of his visit home to Georgia and although it was hard to say goodbye to his family, he knows they support him 100%. Next stop, Trevin visits his local school and provides inspiration by telling the kids “once you have a dream, it can always come true”. Dedicating his song tonight to his school, Trevin is singing “Wind Beneath My Wings”

Coaches Comments: Adam “Trevin it’s over, you did a good job. I said you should do this song and I knew you would kill it”. Christina “That song really took me back to when I started out, I never sang it as crazy great as that, you took it to a whole new level”. CeeLo “We are at an important part of the competition and it is amazing how beautiful your voice is”.

Nicholas David is up next, but first we get to see his visit back home to Minnesota where he gets to see his new house for the first time. Next stop is the doctor’s office to hear his baby’s heat beat, then on to the Mall Of America where he was presented with a golden microphone. Last stop for Nicholas is a place he used to sing at, the Happy Gnome. Nicholas is dedicating tonight’s song to his whole family, “You Are So Beautiful”.

Coaches Comments: Adam “That is just all I ever care about with any singing from anybody, you are one of the most soulful people I have ever met, I like you”. CeeLo “You look very handsome tonight, this was the right thing to do, it was beautiful and we are your family Nick”.

The holidays are all about rekindling for the holidays and in the spirit Blake invited all 16 of his team Blake singers to come back and sing “White Christmas” with him.

West Palm Beach, Florida is Cassadee Pope’s hometown and having the support of her whole family means everything to her. Next stop is the radio station that she has been listening to since she was a kid, then it is on to perform for her fans. Singing a special song that was hand picked by Blake, Cassadee is singing “Stupid Boy”.

Coaches Comments: Christina “You know that I am a fan, your voice is always on point and perfect, there are a lot of artists that wish they could do that. Your passion brings your lyrics to life, you have a true super star on hand”. Blake “The reason that Cassadee did county songs on this show is because she connect with lyrics like nobody else”.

To close out the night, it’s Scottish rocker Terry McDermott in his hometown of New Orleans and his first stop is home. Next stop is the Hard Rock Café to dedicate some memorabilia from The Voice. Next, Terry gets the surprise of his life when his aunt and uncle flew in from Scotland to see him. Singing one the most loved songs that unifies us all, Terry is singing “Let It Be”.

Judges Comments: Adam “That’s just, thank God for you Terry, you are so wonderful. There is so much wrong with the world and it is really important to have moments like this inspire us, you did a great job”. Blake “There are only a handful of artists that should attempt that song and you are one of them, that was musical perfection.”