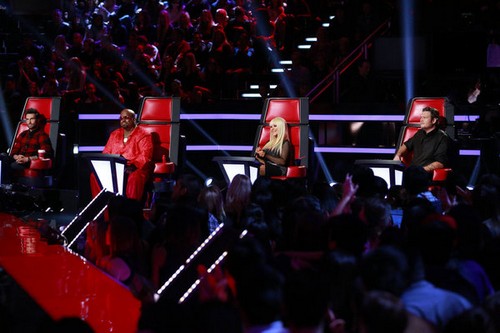 Tonight on NBC is a whole new episode of THE VOICE and the competition is really heating up. On tonight’s show the top eight artists perform live in front of coaches Christina Aguilera, Adam Levine, CeeLo Green and Blake Shelton for America’s vote.   Did you watch last week’s show? We did and we recapped it for you here!

On last week’s show for the second week America decided who was going home.  By the end of the results show Team Christina’s Sylvia Yacoub and Team Levine’s Bryan Keith found themselves leaving the competition.    Did you think the correct two were sent home?

On tonight’s show the eight elite artists will each give their all – and your votes will decide who moves on.  The Top 8 of “The Voice’s” third season are: Team Cee Lo’s Nicholas David, Cody Belew and Trevin Hunte, Team Blake’s Cassadee Pope and Terry McDermott, Team Christina’s Dez Duron and Team Adam’s Melanie Martinez and Amanda Brown.

Tonight’s performance show will showcase Adam Levine and the artists performing with 50 Cent in “My Life.”  Tonight’s Top 8 represent the best of the Voice and it is anyone’s game.  Who do you think will win The Voice?

Tonight’s “Live Top 8 Performances” is going to be an exciting one, which you won’t want to miss. So be sure to tune in for our live coverage of NBC’s The Voice – tonight at 8PM EST!  While you wait for our recap, hit the comments and let us know what you have thought of Season 3 of The Voice, so far!

Tonight’s show: Tonight we are live with your top eight, it’s week four of the live shows and only the greatest singers remain and this week two more artists are going home.

Starting with team Adam, it is Amanda Brown and she is making the transition from everyone making decisions for her to making her own. Amanda is singing a bold version of “Someone Like You”.

Coaches Comments: Blake “I really enjoyed that, Adam was hard on his team with the Adele songs and I loved that you brought it out because you are a rocker and I can’t get enough of it”. Christina “Another powerful and dynamic vocal, I can be hard as well but you definitely changed it up, we are still waiting for you to tap into it and understand you as an individual artist”. Cee Lo “I truly believe the reward is in the risk that you take and you are brave enough to take those risks”. Adam “I like to listen to everyone talk, I am hard on people who do Adele songs but this didn’t resemble the original in any way, it was a huge power ballad and we are hard on you because we except so much from you”.

Up next is team Cee Lo with Cody Belew and he will be showing off his big beautiful voice tonight singing “Somebody To Love” by Queen.

Coaches Comments: Adam “That was great and one of my favourite songs, I think that Freddy Mercury exposes my weaknesses and like you I am a scholar, it was theatrical and a great job, we enjoy everything you do up there”. Blake “It is so awesome when you see the right connection being made, you have the talent to these big performances, it is so impressive”. Christina “I think I enjoy that you are definitely a risk taker and you are not afraid to change it up, every week you come up with something different and I love that”. Cee Lo “What a wonderful job, I’m just so very proud of your growth at an accelerated rate with such poise and confidence. You make me feel confident about my own instincts, I love our partnership, we are making quantum leaps and I found a really good friend in you”.

The first group performance tonight is performed by Cassadee, Dez, Melanie and Terry singing “Move Along”.

Blake Shelton’s Terry McDermott will be singing one of his very own songs, “Over” and Blake wants this to be the version that people remember.

Coaches Comments: Christina “You are always a solid vocalist, I never heard the range in the lower versus before but once you got to the second chorus, it was great. It was a little unexpected by me, but it was solid”. Cee Lo “I’m a big fan of yours, you kind of remind me of Bruce Dickerson, great rock vocalist”. Adam “So that is what that song is supposed to sound like, just kidding. I’m a huge fan of yours and that was just great. I got to day, the precision is inspiring”. Blake “You performed that song the way I wish I always could and it was amazing. Adam was right, you proved yourself as the real deal and the real artist. You can do anything with what you are handed and you are a star”.

Up next is team Adam’s Melanie Martinez singing a breakup song and she is looking at expressing her raw emotion in this song as she has recently gone through a breakup. Melanie is singing, “To Close”.

Coaches Comments: Blake “Your voice just melts me, you are one of my favorites and I am so glad to see you back with your tambourine, that’s cool. You are always brilliant”. Christina “The set was so cute by the way, it didn’t really go anywhere but it was favourite performance from you so far, I like it”. Cee Lo “It was such a cool set, these new arrangements sound really great and showcase the cool quality of Melanie’s voice, you made this your own and it was a success”. Adam “I love you, when you are going through a breakup, you want to make the person who did this to you feel dumb and you did that successfully. I love seeing an artist up there that is concerned with every aspect of the performance and I love the way you present yourself”.

Team Christina’s smooth pop vocalist Dez Duron is next and music has always been in his heart even though he was heading into a successful football career. Dez is singing “You Smile” by Justin Bieber and the stakes have never been higher as Dez is the last singer on Christina’s team.

Coaches Comments: Cee Lo “I always give you credit where it is due, it is hard to think that you have done anything else but sing because you are so passionate about it. I don’t think this was your best performance tonight”. Adam “I love the groove you fell into, walking away from something that you had you have to have tunnel vision, I applaud you for turning and not looking back”. Blake “We have always known that you have a star quality, last week was a big deal and you it on something and I am happy that you went there again”. Christina “I understand that you killed it, that song you revamped and made it something so special, anyone else in this competition cannot do what you can on this show”.

Team Cee Lo’s newly conident Trevin Hunte was pushed into football as well, but music has always been in his heart. Trevin is singing “The Greatest Love Of All” by Whitney Houston and has a big mountain to climb.

Coaches Comments: Adam “I really hope that when I die and I go to heaven, this is heaven, I love it. You can sing anything you want, it doesn’t matter, we all love what you do, another excellent job”. Blake “You are an amazing singer and a good dude too. I think this song was really in your wheelhouse, this the guy we have to figure out how to beat”. Christina “Wonderful job as usual Trevin, you didn’t fully capture this song but your voice is a monstrous beast”. Cee Lo “Man, I am very proud of you what a wonderful performance. I am certain that Ms. Whitney would be proud, I am truly indebted and the sweetest thing about you is the humility that you practice”.

The second group performance tonight is performed by Amanda, Cody, Nicholas and Trevin singing a Journey classic, “Any Way You Want It”.

Now it is the spiritual singer from Minnesota, team Cee Lo’s Nicholas David and he has no intention of cutting his beard because his wife is pregnant and while his child is growing so will his beard. Nicholas had a surprise this week during practice, Bill Withers who wrote “Lean On Me” dropped by to give him advice. Nicholas is singing “What’s Going On” by Marvin Gaye.

Coaches Comments: Adam “Every song every week is like my dream song, you pick the best song. I love the element that you give the show, the soulful songs and I am going to be a fan of yours forever”. Blake “I feel like I learn something new about you every week, every week you do something amazing, thank you for letting The Voice introduce you to the world”. Cee Lo “Nic man, I love you so much. Good music is a healing property, we could use more of that”.

Time for the last person to perform and it is team Blake’s Cassadee Pope and she is singing “Are You Happy Now” by Michelle Branch.

Coaches Comments: Cee Lo “To answer your question, I am not happy now because you could win this competition”. Adam “We used to open for Michelle Branch. I was a little scared of the smoke machine but you are the front runner. You did a really great job this week”. Blake “It is Cassadee’s mom’s birthday and America is something important, last week was vulnerable, this week you showed that you are just as good as anyone else in this competition, thank you for being on my team”.