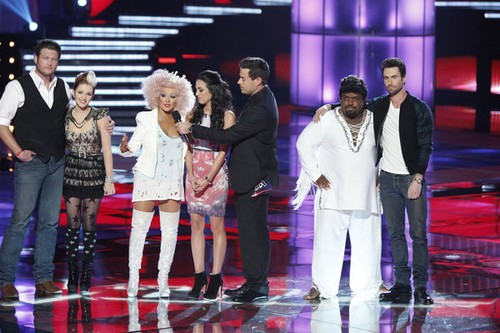 Tonight on NBC is a whole new episode of THE VOICE and the competition is really heating up. On tonight’s show the top 10 artists perform live in front of coaches Christina Aguilera, Adam Levine, CeeLo Green and Blake Shelton for America’s vote and a chance to move on to the elite eight. Did you watch last week’s show? We did and we recapped it for you here!

On tonight’s show the finalists will be singing alone and have to bring their A game to make it to the elite 8.   The 12 finalist are: Team Adam Levine: Amanda Brown, Bryan Keith, Melanie Martinez Team Cee Lo Green: Trevin Hunte, Cody Belew, Nicholas David Team Christina Aguilera: Dez Devon, Sylvia Yacoub Team Blake Shelton: Terry McDermott, Cassadee Pope.  After the performance show tonight America will vote to eliminate two artists from each team and the remaining eight will move on to the next phase of the competition.

On this season, not every coach is guaranteed a spot in the Final 4.  Each week all of the remaining contestants will perform and those in the bottom two will be sent home.

Tonight’s “Live Top 10 Performances” is going to be an exciting one, which you won’t want to miss. So be sure to tune in for our live coverage of NBC’s The Voice – tonight at 8PM EST!  While you wait for our recap, hit the comments and let us know what you have thought of Season 3 of The Voice, so far!

The pressure is on this week on The Voice. Two more are going home and there is the possibility that a coach can be left without a team. Christina Aguilera and Blake Shelton collaborated on her new song, Just A Fool to open the show. Not your typical Christina song, it actually has a kind of country vibe to it long before Blake steps in to sing his part.

Team Christina is up first tonight and Silvia Yacoub will be performing first. She’s singing This Girl Is On Fire by Alicia Keys.  I wasn’t sure if she’d hold it together but Silvia actually set the bar pretty high. Cee-Lo thought it was a great choice and she did amazing. Adam Levine says it was her most polished performance and it blew him away. Blake Shelton agrees with both and he also comments on how hard it is to be the first to perform.

Team Blake is on next with Scottish rocker Terry McDermott’s performance of Summer of 69 by Bryan Adams. Christina thought it was a spot on performance. She also loves how he sings on his tippy toes.  Cee Lo thinks Terry reminds him of everything that he loves about music. Adam gets angry watching Terry because he so badly wanted him on his team, but that said he loved it.

Team Adam is putting a lot of faith in 17-year old Melanie Martinez. She’s going to perform Seven Nation Army by the White Stripes and this just might be amazing. And it is. This girl has a vulnerability that just sucks you in and this song is perfect to showcase that. Blake is thrilled to see her playing her guitar and he wishes that he had an opportunity to work with her. Christina sees that she pushed herself further than usual and still needs to find her comfort zone. Cee lo thinks it’s the coolest thing he has seen this year.

Team Cee Lo’s Cody Belew is going to take the stage to perform Beyonce’s Crazy in Love and I have to admit the practice bits are making me want to hear this. Definitely worth the anticipation. It was fun and Cody certainly found his groove with this. He kind of reminded me of Adam Lambert here. Adam thought he was really cocky in an awesome way. Christina thought he worked it like a true diva.

Team Adam’s Bryan Keith is performing Billy Joel’s New York State of Mind which is perfect for this New Yorker. He’s definitely selling it because the audience seems to really love his rendition of this classic. Blake thinks Bryan reminds him of Michael Buble. Christina thinks this song was the perfect choice because he really connects with the song and his audience. Cee Lo thinks he sings like a mans man. He loves the strength in his voice.

Also performing for Team Adam is Amanda Brown singing Stars. The crowd seems to really love her voice and Blake, like me, didn’t know that song. He said it’s exactly how he’d want to be introduced to it. Christina loved the very emotional performance. Cee Lo was impressed by the job Amanda did.

Team Cee Lo’s Nicholas David is up next with Lean On Me. I’ll admit I hate this song but this guy makes it sound better than most. He is also backed by a full choir. Adam loved how he lost control while singing and owned it. Blake felt like he was watching a legend  and the whole thing soothed Christina’s soul.

Trevin Hunte is also part of Team Cee Lo and instead of his typical ballad he wants to perform Scream by Usher.   I think this night desperately needed someone, anyone to crank out a song like this. The audience was on their feet. Adam thinks Trevin can sing anything and it’ll sound good. Christina thinks this was her favorite performance by Trevin because it was different.

Team Blake has Cassadee Pope performing Over You. This rendition was absolutely gorgeous. Blake is near tears watching her do his special song justice. Christina thanks Cassadee for the sincerity of the song. Cee Lo thought it was an amazing moment. Adam thinks that this kind of song suits her the best because it felt like such a good fit.

Team Christina has Dez Devon singing Feelin’ Good tonight. He absolutely sells this song and the full band behind him pushes the performance completely over the top. Christina is clearly proud of Dez. Cee Lo loved it. Blake congratulated him for figuring out what type of music he should be doing.

Tune in tomorrow night to see who gets sent home!