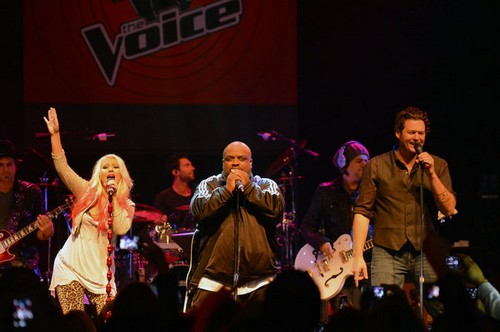 Tonight on FOX is an all new episode of THE VOICE. On tonight’s elimination show America will vote to eliminate two artists from each team and the remaining six contestants will move on to the next phase of the competition. Did you watch last night’s show? We did and we recapped it here for you! Did you miss any of the performances, if you did you can see all the video’s here.

Last night, the top 8 artists performed live in front of coaches Christina Aguilera, Adam Levine, CeeLo Green and Blake Shelton for America’s vote and a chance to move on to the elite six.

We conducted a poll today and a 30.8 % think Dev Duron will be leaving tonight, followed by Trevin Hunte with 16.1 %.  There is still time to vote if you have not, go here!  What do you think of the results of our poll?

On tonight’s performance show  the top 8 find out who American decided to save.  Also mentor CeeLo Green forms an unforgettable duet with Disney’s Kermit the Frog for the classic song “Bein’ Green.”

Tonight’s “Live Top 6 Results Show” is going to be an exciting one, which you won’t want to miss. So be sure to tune in for our live coverage of NBC’s The Voice – tonight at 8PM EST!  While you wait for our recap, hit the comments and let us know what you have thought of Season 3 of The Voice, so far!

Tonight’s episode: The results from the votes are in and tonight eight becomes six. Amanda Brown and Trevin Hunte open the show with a an awesome performance to Lady Gaga ‘s “I’m Going To Marry The Night”.

It’s time for some results and if Dez Duron goes home tonight, then Christina will lose her last and final act. After last night’s performances, here is the name of the first person that will move on in the live shows; America has saved from team Blake, Cassadee Pope .

CeeLo heads to Las Vegas to tape his Christmas show and meets with some past and present The Voice acts to surprise them that they will be performing on his show with the muppets. CeeLo brings back Kermit the frog to perform on The Voice stage with him, they sings “It’s Not Easy Being Green”.

Melanie, Terry, Cody and Nicholas perform “Rhythm Of Love”, then we see footage of the top eight getting a lesson in morning radio by Carson where the acts have to sing there names to win over the fans.

Back to more results, time to find who the next artists is that is safe and continuing on to the live show. America has saved from team Adam, Melanie Martinez.

Cassadee and Dez are on stage to perform “I Hate That I Love You”.

Time for another announcement, one more person that is saved by America’s votes and it is from team CeeLo, Nicholas David.