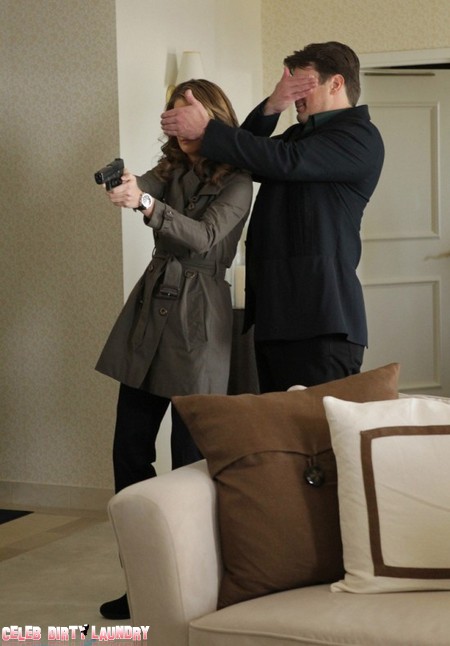 Tonight on ABC a whole new episode of Castle airs.  The episode is called ’The Limey’ and we will be live blogging the episode with all the up-to-the-minute details.

On last week’s show a bomb exploded at a protest rally killing five people, Castle & Beckett realized the key to solving the case was to reconstruct the 47 seconds prior to the explosion. Using video and witness accounts, they uncovered the shocking truth about who planted the bomb.  If you missed the episode you can read our full recap here!

On tonight’s show A devilishly handsome detective from Scotland Yard, Simon Hunt, teams up with Castle & Beckett to find the person responsible for the murder of his friend’s daughter.

Also, Charles Shaughnessy (“Days of Our Lives”) plays Nigel Winthrop, the Deputy General at the British Consulate whom Castle & Beckett suspect is up to more than just ambassadorial balls and diplomatic luncheons. Meanwhile, Lanie convinces Beckett that she needs to make a move on Castle before it is too late.

We will be live blogging the show with all the up-to-the-minute details at 10PM EST so make sure to come back to this spot and watch the show with us. Make sure to refresh often to get the most current update!

RECAP: The show opens up with a woman dead, a guy is rummaging through her clothes and when a woman walks into the room the guy pushes his way out the door, she goes in and finds the woman dead.

Becket is thinking that Castle is moving away from her and is worried about it, Lanie tells her that Castle can’t wait forever. Becket is worried that they will lose their friendship but Lanie is worried the fuel is going to run out. Becket gets a phone call, Lanie tells her that she is not saved by the bell. Castle pulls up to the scene of the crinme in a red convertible with a woman. Becket tells him she feels that she just witnessed a scene from Miami Vice. Castle explains that he just came back from a weekend in Vegas with the flight attendant.

The victim checked in two hours before she was killed, the goodness is that there is a witness. She was not robbed, her wallet was not touched. She was strangled, Becket is thinking this is a one night stand gone wrong. Esposito finds a business card, she was a model.

Caslte and Becket go visit the modelling agency and bring a artist’s sketch, they meet with a woman who tells them that Naomi had been doing more unconventional events lately. She goes on to say that Naomi wanted her to get her into an album launch party last night, but she couldn’t get her in.

Ryan says that more people witnessed the same guy at the motel and they have a foot print, they also know the hotel where he checked into this morning. Castle and Becket go to the guys hotel and bust open the door, the guy is there, in a towel and when Becket tells him to put his hand up, he does but the towel falls to the floor. He introduces himself as being an Detective Inspector, Hunt from Scotland Yard, they’ve made a mistake.

Hunt admits that he left the crime scene, there was nothing he could do because she was dead already. He was a friend of Naomi’s family and knew there was trouble so he came to help, but it was too late. He found a message from the killer, but he won’t tell them until he is on the case. He begs Becket to let him work on the case with her or he will go out there and get the bastard himself.

Hunt tells Castle that this Naomi is really not the Naomi that he knew well. Becket announces to Hunt that he is in, apparently he is the best at Scotland Yard. Hunt gives Becket a key, that belonged to Naomi.

Esposito tells the group that Naomi was at the album launch party for Biggie Slim and got into a fight. Becket and Hunt interview the woman that fought with Naomi, she claimed she had her thrown out of the party. Castle opts out of interviewing and leaves. They then interview Biggie Slim, he says Naomi was acting paranoid, she thought someone was following her to the party. Naomi left that party and three hours later, she was dead.

The autopsy is finished, her larynx is crushed, whoever did it was very strong and they have a partial print due to the body lotion she was wearing.

Hunt tells Becket that Naomi fell in love with a doctor and last year he died. Becket gets a call from Ryan, Naomi had a day pass at a gym, they head over there and find a locker that she used, they open it and it is a photograph of the killer with his phone number.

Castle, Becket and Hunt magnify the photo and find out that the guy is Nigel Wyndham, who works for the British Consulate. Esposito comes in and tells tham that Naomi had dinner with Wyndham, it appears that she may have been having an affair with him and didn’t want his wife to learn about it because it would have destroyed his marriage and his career. Gates wants them to get a fingerprint match before she will move ahead with their hunch that Wyndham is their killer.

Becket and Hunt are all dressed up in black gown and tux, they are going to a party to try and get the killer’s fingerprints because they think Wyndham will show up. Castle is awestruck, he can’t believe how good Becket looks all dressed up.

At the party, Hunt and Becket dance, Hunt tells her that she is the most beautiful person in the room. They both share some tidbits about how they grew up, both admitting they are married to their jobs. Just then, Becket notices Wyndham and makes her move, he immediately introduces himself to her and buys her a drink. He asks her if she is there alone and asks her for a dance. Wyndham and Becket are dancing, she tells him that there is more to her than meets the eye. Wundham had a glass in his hands and puts it down to put both hands on Becket while he is dancing with her and Hunt scrambles to get the glass but he is caught, security has figured that they he and Becket are not invited guests and throws them out. Hunt is surprised that Becket had to time to get fingerprints off of Wyndham’s card case.

They run the fingerprints, Wyndham is not the killer. Castle brings to their attention that they should be looking at the number on the back of the photo, the number refers to a diplomatic pouch and Castle was able to get that information from his date with the stewardess. Becket tells Castle that he can’t share confidential information with an outsider, Castle is confused that there would be a problem since the information helped.

They were able to get information about the diplomatic pouch from the airline, it weighed 200 pounds and came from Uganda. Hunt heads over to the baggage area and pretends to be from Homeland Security, he gets in but doesn’t have long because he lied to a security guard. He finds the crate, the security guard tells him that his supervisor is on his way, Hunt gets the crate opened, there are missiles inside.

The crate will not be able to be used as evidence, because it was opened. Becket and Castle think that it was one of those missiles that hit the helicopter and killed her boyfriend. One piece in all of this doesn’t fit, what was Naomi doing with Biggle Slim, aka Darius Young. Hunt and Becket bring Slim in,they show a picture of Wydham getting out of a SUV, the same one that Slim was seen in. Naomi was looking for evidence, Slim knew that and Becket thinks that he killed her. Hunt tells him that the fingerprint on Naomi’s throat was his. Becket asks why Uganda, Slim tells her that it wasn’t about Uganda, it was about the money.

Becket and Hunt head over to see Wyndham, they arrest him for trafficking. Hunt is headed back to London, he has a few hours before his flight and asks if he can persuade her to let him buy her a drink, she looks over at Castle and tells him that she has paperwork to do. Becket asks Castle if they can talk, he brushes her off because he’s got his girlfriend outside waiting for him. Becket lets him go and doesn’t speak to him. She calls Hunt and asks him if he still wants to buy her that drink.

No hook up for Becket and Castle yet, ugh!