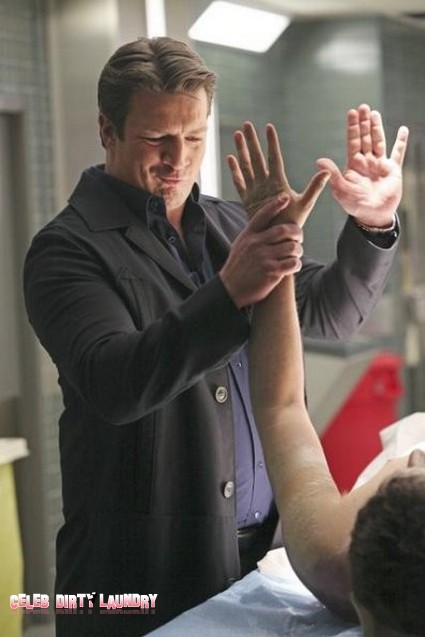 Last night was the forth episode of the 16th season of Castle and we recapped it.  Welcome to the wrap up of Castle episode number 11 “Til Death Do Us Part” – and boy, was I ever on the edge of my seat although the violence was pretty intense!

What did you think of Rick bringing his daughter, Alexis, along? Was Kate right to be jealous – or was she just pissed that she isn’t getting enough alone time with Rick?

Everyone was jealous funk – with Esposito thinks Lanie is hooking up with her assistant. Is this a theme or something in the episode?

What is with the victim, Michael Bailey? I mean a room booked by a Jane Eyre… was Bailey blind? I mean Jane Eyre is no black widow as Rick called her – in fact she is quite the opposite character in the eponymous book by Charlotte Bronte. At least Holly has a good excuse – NOT- Baily got dizzy and opened the window and fell out. Did you believe it?

In any case we learned that Bailey was a busy dude – poisoned y a lethal dose of cultizene AFTER having sex with two different women within hours of his death. Can you blame Holly for wishing she had pushed the bum out of the window?

I wasn’t surprised that Bailey turns out to be a big-time Lothario – how about you? Not only was Bailey a Casanova but he was a Bernie Madoff as well – ripping off all those trusting women – what a bad man!

Kate and Rick go to Michael’s work to find out why he took a leave of absence, the boss tells them that he was having personal issues. His boss said that the cash and ID may have something to do with a woman trying to break into his office recently. The receptionist gives further information, she said that the woman, Colette Roth, tried to break in and she is a former Israeli military.

Esposito turns out to be really jealous about Lanie’s one plus and runs him through the system to find out that he is a doctor.

Is it any surprise that Bailey was kidnapped by “ruffians in ski masks?” Colette really did try to save Michael, but she wasn’t successful – too bad, so sad.

Rick thinks the victim was in covert ops and the enemy got to him, although he managed to escape, then they sent in a secret sexy agent and he gets poisoned – but the CIA, the FBI and DHS haven’t heard of him. Is this really a surprise – given the bang up job these services usually do???
Where you surprised when the kidnapping turned out to be faked – just a scam to help Bailey shake a pesty Colette?

But here is the kicker! Bailey kept a photo-journal of all of his conquests and Rick finds Jenny in the book. At the time, she was about one month into her relationship with Ryan. Could this be trouble for Ryan and Jenny’s wedding!

When Kate doesn’t give in to Rick’s questions and leaves him wondering just how many men there are I was upset. How about you? Is that a smart was to behave?

Alexis found a really nice black dress, but while out shopping, she hooks a date with a guy on the same day as the wedding, so she bails as Rick’s plus one. Ryan and Esposito are rambling on about dating. Ryan tries to knock the doughnut out of his hand because he’s flaunting it.

Esposito tells Ryan about Jenny and Michael, it turns out that he already knew, Jenny told him already, but said that she didn’t know he was a pickup artist. What was the dynamic here?

Lisa’s husband, Ron, was screwed in the KPW deal and Holly Franklin was the lawyer for the deal. They head over to the place where the victim was renting out as Jake Hendricks and they find some chocolate protein shakes that masked the cultizene.

The case is closed, Rick and Kate arrest the CEO of the company, she killed Michael to protect corporate secrets. At the wedding, Esposito is waiting at the door with his plus one, when Lanie walks up with Toby, her gay friend. Kate and Rick agree to be each other’s plus ones, so they don’t have to sit at the singles table.

What did you think of the episode? How could the show improve? Sound out in the comments below!