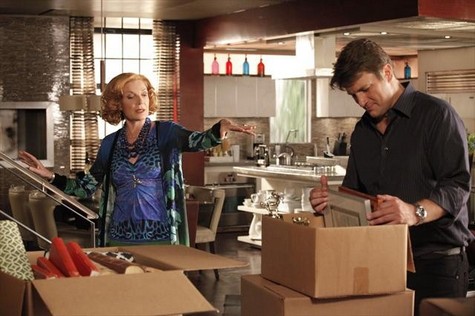 Tonight Castle returns to ABC with a whole new episode called “Secret’s Safe with Me.” On tonight’s show when a young woman is mysteriously murdered, Beckett and Castle discover her death may be linked to a repossessed storage unit up for auction. Did you see last week’s premiere episode? We did and we have a full and detailed recap here for you.

On last week’s show on Beckett’s first day back from her suspension, she and Castle were thrown into the salacious world of local TV news when WHNY’s veteran weather girl was found dead. As if navigating an industry full of backstabbing and ruthless ambition wasn’t difficult enough, they had to do it while hiding their new relationship from their coworkers.

On tonight’s show when a young woman is mysteriously murdered, Beckett and Castle discover her death may be linked to a repossessed storage unit up for auction. Was the unit connected to her death?

Was something inside it worth killing for? The investigation leads Castle and Beckett to colorful “Storage Wars”-like treasure seekers and Manhattan socialites as they uncover the shocking truth.

Tonight’s episode: Alexis is packing to bring stuff to her dorm room and Castle thinks she has packed too much. Martha thinks Castle should give Alexis “the talk” before she heads to college, Castle thinks she means sex, but she means his sleeping with Becket. Castle confides in Alexis and was too preoccupied to even comment.

There is murder, Wendy Dupre, with a single gun shot to the chest and she died slowly enough to write something out in blood, “lie  3-1-7”. She is a Philly girl, she had $4,000.00 on her. Wendy has a message on her cell phone from the guy who owns the money, Pratt, he thinks she stole from him and although he is mad at her, he is shocked that she is dead.

Castle answers Becket’s phone, it’s Lanie, she found some trace DNA but it’s not a match for Pratt. Becket walks in and she is not happy that Castle was on her phone, she tells him to stay away from her stuff.

Wendy used her credit card for cab to take her to 8th and Market, Castle and Becket head over there, it’s an auction. Castle thinks Wendy had the money so she could bid on a storage locker.  Wendy was killed buying a unit, Castle and Becket can’t let anyone else get it.

The owner of the unit was a person called Flemming, Castle brought his checkbook, they need to bid on it. They don’t have enough money, so Becket talks another bidder into giving her his money in exchange for naming one of the characters in Castle’s next book after his mother. Castle won the locker and the guy’s mother’s name is Eunice that he has to name his next character after.

At the station, Castle has all the stuff from the locker and he and Esposito are going through it to figure out who Flemming was. Gates walks in and is furious that the station is a mess with all the stuff, until she sees a doll that she has been looking for since she was a child. Castle gives her the doll and Gates walks away completely distracted. They find some ta returns and figure out that the locker belongs to Wendell Dupre, Wendy’s twin brother but there is more, he was killed weeks ago in an accident.

Becket just got off the phone with someone who worked with Wendy who tells her that Wendell was in trouble and she thinks he was murdered.

Castle and Becket head over to Wendell’s last place of employment, they meet Angelica, his employer. They ask her if Wendell had any enemies, she says no and the police cleared him. It appears that her 4 million dollar bracelet went missing and Wendell was dismissed as a suspect.

Castle is excited that it is special night to have dinner with Alexis but she is doesn’t like that he is dating Becket and tells him to take her instead.

Uniforms are going through Wendell’s belongings, the don’t find it but they figure out that the job was a two man job and Wendell was one of them. Becket figures out that the guy at the storage locker that was bidding against them, Felix, is probably the person that was in cahoots with Wendell. Felix claims that he was offered $500.00 proxy to bid on the locker, Castle and Becket know that Wendell had a partner, they just have to figure out who it was.

Marco Vinstoli’s van got a ticket the night the bracelet was stolen, he also broke into Castle’s storage unit before he bid on it. They have a licence on his van, they head right over there and find Marco.

At the station, Marco plays dumb and says they only got him for stealing a safe. Meanwhile, Ryan and Castle are getting the safe opened. Marco admits that he helped Wendell break into the penthouse, he was paid five grand for doing the job. Marco says he didn’t even know Wendell took the bracelet until he read it in the papers.

The safe is empty, no bracelet. Castle is wondering how Wendell could even pull this off to begin with. Becket thinks Angelica is maybe lying about something, Castle thinks it could be insurance fraud.

Becket and Esposito got a search warrant and they are at Angelica’s house to go through her safe. Inside, is the pink bracelet. Angelica admits that she lied about the bracelet being stolen, she admits the insurance fraud but denies the murder.

Becket doesn’t understand why Wendell had the storage locker, if he didn’t in fact steal the bracelet why would he have the locker and why would his sister write it in blood.

Becket and Castle shake hands before he leaves and the sexual tension between the two is electric.

Castle is with Alexis at her dorm, he tells her that no matter what goes on with Becket she will never take her place in her heart. Alexis says that this is not about Becket, it is about her waking up in the dorm and him no longer being there. Before he leaves, Alexis has him check under the bed to make sure that there are no monsters.

Castle is outside with his mother and the two hug, Castle sees a girl with a stuffed animal back pack and finally figures out that Wendell and Wendy were hiding something inside the doll he gave Gates. Castle heads to the station and starts breaking the dolls, Gates freaks out, one of them where her collectibles from home.

Castle figures out that Wendell was looking for a one eyed person, the same person that caused his parent’s murder. It turns out that Angelica’s butler, Kirby Smith’s DNA was on the fake eye that was found at the scene of the accident. Smith made a full confession, he killed Wendell and Wendy because he didn’t want to be implicated for the murder of their parents.

Castle makes a break through with Becket, she tells him all about a personal item in her drawer, a stickman. It was by her and her father out of twigs when they walked along the beach after her mother’s funeral.

Later that night, Castle arrives home to find some of Alexis’s boxes on the floor. Marta walks in and tells him that out of the goodness out of her heart, she will continue to live there so that he will never, ever be alone. It’s a parent sacrifice.