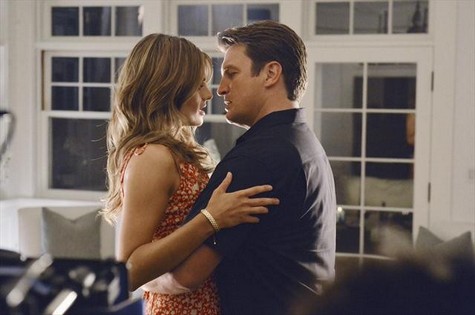 Tonight Castle returns to ABC with a whole new episode called “Murder, He Wrote.”  On tonight’s show Castle and Beckett’s plans for a romantic weekend in the Hamptons are interrupted when a dying man stumbles into Castle’s backyard, collapsing into his pool. Did you see last week’s premiere episode? We did and we have a full and detailed recap here for you.

On last week’s show when a young woman was mysteriously murdered, Beckett and Castle discovered her death might be linked to a repossessed storage unit up for auction. Was the unit connected to her death? Was something inside it worth killing for? The investigation leds Castle and Beckett to colorful “Storage Wars”-like treasure seekers and Manhattan socialites as they uncovered the shocking truth.

On tonight’s show “Murder, He Wrote” – Castle and Beckett’s plans for a romantic weekend in the Hamptons are interrupted when a dying man stumbles into Castle’s backyard, collapsing into his pool. Unable to escape the lure of the investigation they join up with the small town’s well-intentioned, but inexperienced sheriff to find the killer.

Tonight’s episode: It’s the first weekend away for Castle and Becket, Martha and Alexis want to know his plans and are surprised when he tells them he has none. Meanwhile, Becket is watching the clock and waiting for it to strike five so she can go on her date with Castle.
Esposito is surprised to find Castle at the station and tell him that Becket has a date and won’t tell who it is. Ryan wants to know if the guy is bad ass, but Becket won’t tell. Esposito and Ryan really want to know who it is and feel it’s their duty to find out if Becket won’t tell.

Castle and Becket arrive at their destination; it’s a beautiful mansion and is overwhelmed at the size of the house. Becket finds the house spectacular and wonders how many others girls got the same tour before her. Castle admits that he has brought other girls there, but none of them were her.

It’s dark, Castle and Becket are ready to get into the pool, she drops her robe and is completely naked just as she hears someone coming. Becket quickly puts her robe back on and a guy stumbles forward near the pool and falls in.

Castle calls 911, the cops arrive and Becket tells him to leave her name out of it, the cop thinks she is a prostitute, he doesn’t realize she’s a cop and doesn’t want anyone to know that she was with Castle.

The victim’s name is Randolph Franklyn, he was a party early in the evening in the neighborhood. The cops finds some guy who is high on meth and the cops right away blame him for the murder.

Castle is having a hard time putting the murder out of his mind, he is obsessing and Becket wants none of it.

The next day, Castle does a little digging and finds out that Randolph was having an argument on a beach with a women in a white dress not long before he died.

Ryan and Esposito confide in Lanie that they want to know who Becket is spending the weekend with and she basically tells them to mind their own business.

Castle enlists Esposito and Ryan’s help to bring in Randolph’s wife to ask her questions. She tells them that he was probably talking to his girlfriend on the beach, he was having an affair.

Castle and Becket find Randolph’s girlfriend, she works at a bar and they head on over there for drinks, it turns out the she is good friends with the chief of the police who arrests Castle for messing with his murder investigation.

The chief of police lets Castle and Becket out of jail after he Googled Becket, he knows that she is a homicide investigator. He offers to take away the charges against them, if they help with his murder investigation.

Becket tells the chief that she wants them to call in Natalie Roosevelt for questioning. It turns out that Randolph broke up with her the night he was murdered, she claims he got a text and left her then she went back to work.

Meanwhile, Castle is helping Esposito and Ryan to find out who Becket is spending the weekend with, or rather, sending them on a wild goose chase.

The autopsy results came in, it turns out that Randolph was killed on a boat and fell into the water. They figure out the the boat belongs to Lerner and their is blood splattered on it. Randolph ratted out Lerner and Castle thinks he buried a grudge and killed him. Lerner tells them to check out his neighbor, he is probably the one that killed Randolph as he was threatening him with all kinds of violence. It turns out that Lerner’s alibi checked out, he was at a weight loss class at the same time that Randolph was murdered.

The insane neighbor, is Vinnie “The Scar” Cardano who belongs to a mafia family. The chief tells them to stay out of this and don’t contact him, it doesn’t take long for them to head over to see Vinnie and ignore the chief.

Becket and Castle share a meal with Vinnie and he admits that he couldn’t stand Randolph but he didn’t kill him, Castle suggests that he did and Vinnie is offended because if he had to whack that guy, nobody would ever find the body.

Ryan, Castle and Esposito dig a little deeper into Franklyn’s life, it turns out that all his properties were housing meth labs and that is why he was killed.

Castle and Becket get back to their weekend together, but Becket just can’t let this go, she thinks there is more to the story. They find out that Lerner was partnering with Franklin, but he claims that somebody else was in on it. Ryan finds out from Lerner that Castle is on the case with a woman, Kate Becket, Ryan is shocked.

Ryan calls Castle and tells him that Lerner told him everything he knows. The doorbell rings and the chief is there, it turns out that the marine operator sent the text and is most likely the killer. The chief invites the two of them to the boat to arrest the marine operator and Castle notices that the knots that tie the boat down are two perfect to be the same person who killed Franklyn because the boat that he fell off of was not tied up properly.

In the end, it’s one of the chief’s cops who framed the marine operator.

Becket and Castle are finally alone and ready to resume their weekend in the Hamptons, alone. Meanwhile, Ryan knows the two are dating but tells Esposito that he wants to let it go because he respects Becket’s privacy.