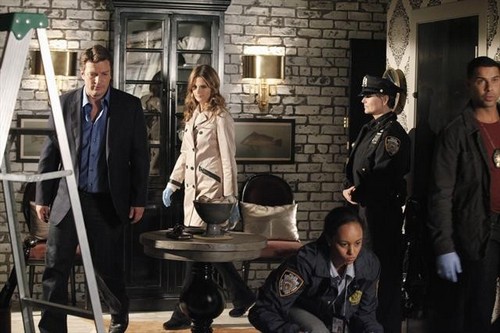 Tonight CASTLE returns to ABC with a whole new episode called “Probable Cause.” On tonight’s show the team is shocked when Castle emerges as the lead suspect in a bizarre murder.  Did you see last week’s premiere episode? We did and we have a full and detailed recap here for you.

On last week’s show Castle and Beckett’s plans for a romantic weekend in the Hamptons was interrupted when a dying man stumbled into Castle’s backyard, collapsing into his pool. Unable to escape the lure of the investigation they joined up with the small town’s well-intentioned, but inexperienced sheriff to find the killer.

On tonight’s show while investigating a shocking ritualistic murder, Beckett and her team uncover surprising evidence linking Castle to the killing. As the evidence against him mounts, loyalties are tested, and when surprising revelations come to light, Beckett begins to wonder how well she really knows her new lover and partner of four years.

Tonight’s episode: There’s a murder in one part of the city and Alexis is home, but only for a short time and she leaves. Castle and Becket are on the case, Tessa Horton is the victim and she was hanging from the ceiling by barbed wire. The killer knew that her roommate was going to be out of town, Becket thinks the victim knew the killer. Castle and Becket interview the roommate, she tells them that she was shy and started seeing someone six weeks ago, she acted like it was a big secret like she was married or something.

At the station, Becket wants the victim’s phone records and emails pulled. Castle thinks whoever did this murder liked it. Lanie has found that the victim was drugged and hung to the ceiling after she was killed, whoever this person is, he knew exactly what he was doing because he was very careful.

The phone records and emails come up empty, but her boyfriend did give her some jewellery so they are going to dust it for fingerprints .

Esposito calls Becket into an office on her own, without Castle, fingerprints at the scene of the crime on the door handle, are Castles.
It turns out that some of the victims’ jewellery is missing; he knew exactly what he was doing.

Kurtzman worked with Tessa, Becket and Castle interview him and it turns out that he was seen at Tessa’s apartment the night she was killed – after a few questions, he asks for his lawyer.

Esposito checks out Kurtzman, there is nothing about him that explains why he would be the killer. Ryan has an earring, it was found in Tessa’s apartment and it’s quite unique and Ryan knows where it is sold. Becket checks the surveillance camera for the jewellery store and they see Castle on the tape.

Ryan tells Esposito that Becket is dating Castle while Becket continues to go over the surveillance tape. Esposito, Becket and Ryan show up at Castle’s apartment for a search and she tells him that they have a video that he bought the jewellery that that Tessa owned, they even have the cancelled cashier’s check that he used to buy it. Ryan has found something, before they tell Castle what it is, Esposito arrests him.

There was Tessa’s blood at Castle’s apartment, Becket still doesn’t believe it and neither does Gates but she tells Becket that they are going to follow the evidence wherever it leads them. Becket asks Ryan and Esposito to keep the phone records to themselves about the fact the she will be on it numerous times.

Gates interviews Castle, she wants to know if Castle knew the victim and he says no. Castle’s mom and daughter have shown up at the station. Gates tells Castle that Kurtzman has been released because his alibi checked out and for the record, Castle has no alibi because he was home writing the night the victim was murdered.

Becket goes to see Castle and tells him that she is going to do everything to get him released.

Esposito tells Becket that Castle’s computer has been partially wiped just like the victim’s but they did find something, emails and dozens of them between Castle and the victim, they were having an affair.

It turns out that Castle was framed, but we all knew that didn’t we. Jerry Tyson is the killer, aka The Triple Killer, or “3XK”, he is a serial killer that started his killing spree in 2006 by claiming six women and he has come back to get revenge on Castle.

Becket tells Gate, Esposito and Ryan that the killer is Jerry Tyson and they just need a delay, but Becket can’t get it unless she gets some evidence that Tyson is involved.

Becket has to go in to handcuff Castle and he makes a joke that this is not as much as the last time she handcuffed him. Castle assures Becket that whatever happens, it will be ok. Castle gets in to an elevator with two officers, but it turns out that they were not the guys that were there to pick him and transport him.

Castle escaped and everyone is looking for him, he has contacted Becket and she is with him. It turns out that there was an ad posted for a Castle lookalike a few months ago, Tyson used the lookalike to buy the jewellery for the victim. Castle and Becket interview the lookalike, he did the gig at the jewellery store and when they show him a picture of Tyson, he tells them that he looks a lot like the producer.

The lookalike gives Castle and Becket an address for the producer and when they check it out with Ryan and Esposito, they find their evidence, a collage of pictures proving that Castle was framed by Tyson.

Becket and Castle tell Gates the whole story and she tells him that he will probably get away with escaping, given the circumstances.

Becket and Castle leave the station and Tyson goes after him and tries to kill Becket, but he fails and Castle instead shoots him and his body falls over a bridge. The body cannot be recovered and Castle thinks everything was a setup, Tyson wanted to disappear and they helped him do it, nobody will be looking for him anymore and that is exactly what he wanted so he could keep on killing.