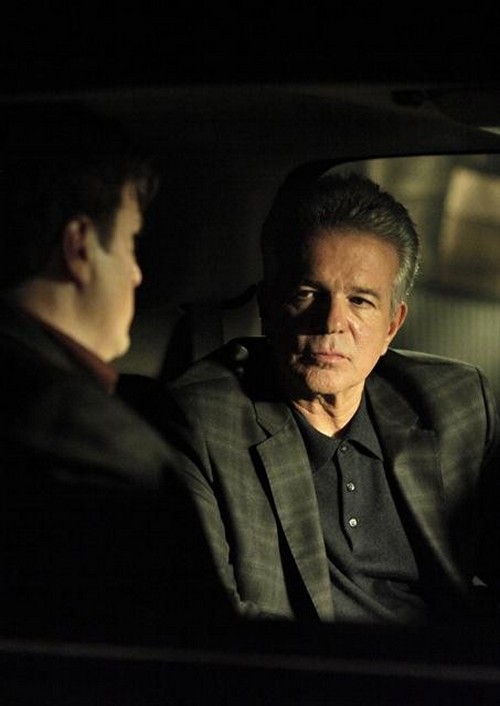 Tonight CASTLE returns to ABC with a whole new episode called “After Hours.” On tonight’s show Castle and Beckett go on the run to protect the only witness to a murder. Did you see last week’s episode? We did and we have a full and detailed recap here for you.

On last week’s show when the lead guitarist of a rock band was murdered, the documentary crew that were following the band turned their cameras on Castle, Beckett and the team as they tried to solve the case. The result was a documentary style episode of “Castle,” which offered us a unique glimpse at our characters as they navigate a world that went far beyond the rock & roll stage.

On tonight’s show In the aftermath of a disastrous “Meet the Parents” dinner, a bickering Castle and Beckett are sent to retrieve the only witness to a murder. But when they get ambushed, they’re forced to take the witness on the run. Stranded in the middle of the night in a bad part of town, with no phone, badge or gun, Castle and Beckett must find a way to protect him from a team of mobsters who want him silenced — that is, if they don’t kill each other first.

Tonight’s episode is going to be great and you won’t want to miss it. So be sure to tune in for our live coverage of ABC’s Castle tonight at 10 PM EST! While you wait for our recap, hit the comments and let us know what your think of Castle season 5, so far? Hit the comments and let us know your thoughts and enjoy some pics and a sneak peek video of tonight’s episode below!

Tonight’s episode: In celebration of Castle and the family, including Becket, getting together, Martha has made dinner for them and Jim, Becket’s father.

Becket and Castle have to run, there has been a murder downtown. Esposito is on the scene, the victim is father Joe McMurchy, he is found in an abandoned building, he is a long way from home and he was shot. The killer was careful, it looks like the work of a pro, he cleaned up his shell casings.

Some guy at bar, Gerry Jenkins, says he knows about the murder and wants to see a cop. Becket goes to see him, he says his customer, Leo witnessed the murder the night before, he gives them his address.

A nun, sister Mary, has walked into the station to be interviewed by Ryan and Esposito. She says that she knows the killer, Michael Dolan, the mobster, they grew up together. She witnessed a terrible fight between the two of them two days ago, last night at 6 father got a call and left in the middle of mass, he said it was about Dolan.

Becket and Castle arguably think each other’s parent ruined the dinner and decide to drop it before the argument gets worse. They arrive at an apartment building looking for Leo and two guys approach them with guns and tell them to drop their weapons, they manage to escape and het into one of the apartments where Leo is. The two guys are banging on the door, they want Leo too, but they want to kill him, they are Dolan’s men.

Castle, Becket and Leo get out, but Becket’s car has been stolen and they are stranded in a bad neighborhood.

Back at the station, Ryan confirms that the phone call Father McMurchy got was in fact by Dolan. Esposito just got back from Dolan’s apartment, he hasn’t been there in days. Esposito and Ryan realize they have a problem, they cannot reach Castle or Becket.

Becket blames Castle for their predicament, they have to keep Leo safe and they have no cell phones and no gun.

Esposito heads to Leo’s apartment and finds it broken into, he thinks Dolan’s people took him along with Castle and Becket.

At the station, Martha and Jim show up, they got a phone call from Esposito and they are both worried.

Ryan has found some info about Dolan, there seems to be a turf war and the only guy that is left in town is Colin Clark.

Becket and Castle are arguing, she broke into a car and stole a phone so they could call for help and Castle answers it, the owner is ticked off and wants her phone back – she disables the phone and tells them she has GPS on them and is coming to get them. Meanwhile, Becket sees a cab and they all run to get it, the driver says he is off duty. Castle offers him a thousand dollars and when he can’t produce, the cab driver leaves them. Leo has hurt his ankle running for the cab and now the three are running from Dolan’s men who have found them.

Captain Gates has Clark in the station and he won’t talk, he wants his lawyer – the only thing he gives is telling her that they have no idea what is going down.

Becket, Castle and Leo are hiding out in a basement, she assures them that they are going to get out of this – she found a Chinese menu, the restaurant is only two blocks from there. Leo feels a lot of tension between the two and picked up a few things from them, after they tell him about the dinner he tells them there fighting with each other has nothing to do with their parents, it’s about the two of them.

Martha and Jim are still holding out at the station, they are talking and getting to know each other more. They bond over their children both being involved in a highly dangerous business.

Castle found a CB radio, he gets it to work and finds a station but the mic appears to be broken. It’s time to try Becket’s idea, Leo can’t make it out because of his ankle so Castle offers to head out on his own, besides they are not looking for him so he heads out to the Chinese restaurant.

The feds had eyes on Dolan so Gates is convinced that they probably know where he is.

Castle is walking, it is really dark and scary – all of a sudden a van pulls up and a guy takes Castle by gun and pulls him inside.

Becket is alone with Leo who gives her advice on her relationship with Castle and she asks him if he is Dr. Phil, he just tells her that he is a guy that may die because of the situation he is in.

Castle is with Dolan, he wants to know where Leo and Becket are.

At the station, the feds tell Gates that Dolan was in protective custody the night of Father McMurchy’s murder, the O’Reillys are the ones that killed the priest, not Dolan.

Leo finds a gun, he pulls it on Becket and she asks him what he is doing, he says his job. It turns out that Leo is not a witness, he killed McMurchy and thought if he played the witness, Dolan would come to him. Time has run out, so Leo had to make his move. Leo gives Becket her cell phone and has her call Dolan, he lets her speak to Castle to prove he is alive then they make plans to meet under a bridge.

Castle is there with Dolan and they have the upper hand because of a joke Becket made on the phone about their parents. Leo tells Dolan that he is a dead man anyway because the O’Reillys will just send someone else after him.

Dolan is back in federal custody, Leo confessed to killing McMurchy and will be put away for a long time. Gates welcomes Becket and Castle back who tells them that there parents have been waiting for them, Esposito called them when they couldn’t find them. All of a sudden, Becket and Castle see their parents who look really happy together, they don’t know how it happened and they don’t want to know.