CDL Exclusive: Interview With “In The Big House” Stars’ Michel and Louis Verdi 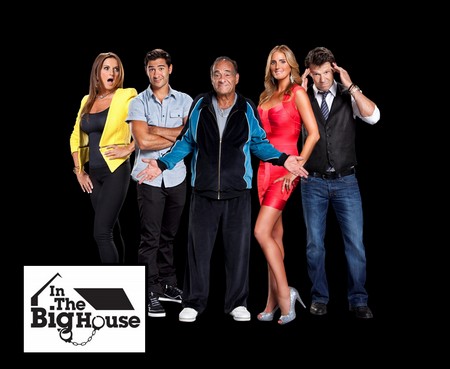 There’s a new docu-reality series coming next week that is sure to appeal too many. In The Big House reunites an old-school Philly mobster with his very modern family in West Hollywood. Lou Verdi is a fast talking patriarch that has moved in with his daughter Michel Verdi and her husband, Jay. His son Louis also lives with them and Lou is having a hard time accepting that Louis is proudly gay. If that’s not enough stress under one roof, throw in Lou’s ex-wife Dotsie and you have a recipe for drama. The surprise here is that this show comes across as very raw and real. The Verdi’s are an example of an imperfect, very real American family and that makes them endearing. Celeb Dirty Laundry had the opportunity to chat with Michel and Louis about their show. Check out what they had to say below.

How did a reality show come about for your family?

Michel Verdi: Someone approached me four or five years ago with the idea and that’s really when it was born. It has kind of been a labor of love and like the little engine that could. When they suggested it be a family project, I thought that was cool and interesting to watch. We’ve all transitioned back together and it’s an interesting process. My brother Louis and I have always been tight and he lives with my husband and I. My mom recently moved out here (to LA) and moved in and so did my dad. The family conflict is really between them. She hates him and they’ve been divorced for 25 years now. It’s insane to have your parents move in with you. My dad missed a lot of my childhood. I was ten or twelve when he went away to prison. I remember my childhood without him and he missed all the important stuff. As adults now, we’re tight. We’ve picked up right where we left off and it’s nice to have him back.

Louis Verdi: At first I was skeptical. I thought about it and talked to my friends and eventually came to the conclusion that we’re entertaining and have a lot of issues that people can relate to. Trying to have a baby, accepting that a family member is gay, everyday relationships- these are all normal struggles in American families. My dad is not the most educated person and he is very old-school. He calls me all the time and never stops talking, which is why he’s perfect for television. I like him, I do. He’s really funny and now I feel like he’s a friend. I didn’t grow up with him so it’s funny to see how much we’re alike now. Growing up without him was hard. We’d go to visit him and I’d talk to him behind the glass and to me that was normal. My mom would take me to all the father/son things at school and I’d cry. I’d like to say that I’m not bitter, but some days I probably am.

From the first episode it looks like you keep yourselves very busy. What are your passions in life?

M.V: My husband and I met 20 years ago and have been together ever since. He was in medical school but left because it just wasn’t what he wanted to do. We were young kids with a goal and we decided to come out here and work our way into the bar and restaurant business. Over the years we have built several places from the ground up. I also own a talent agency. That has been my main job for the last ten years. I basically book extras for television shows. It’s something we don’t talk about on the show because it doesn’t fit in with the stories we’ve decided to tell, but the agency takes up a ton of my time. I think my passion is creating. I love to make something out of nothing.

L.V.: I really hope that this show will allow me to somehow become a speaker for gay rights. I’ll eventually open my business but I pretty much live in the moment. Doing that has gotten me to where I am right now and right now I’m so happy.

What do you hope that this show will accomplish?

M.V.: It’s about family, ours and yours. We all deal with similar issues and similar things in our lives and there is a kind of comfort in that. It’s important that my father and brother try to have a relationship even though they don’t see eye to eye. It’s important that my mom and dad try to learn how to get along for the families sake. These kinds of things are important in other families too and that makes us relatable. This project has brought us all closer together I just want to see everyone happy in the end. I think the gay issue is so important. I’m obviously straight but nearly everyone in my life is gay so I see what they go through at times. If our show can somehow make people choose to be a little more tolerant, that is great. I also struggle with fertility issues, my husband and I have dealt with that for about ten years now. It’s like this shameful thing that you only talk to your husband and doctors about and that is hard. I’m hoping that my story will lead others to share theirs and then maybe I can learn something new too. Maybe we can help and support each other.

L.V.: I am very comfortable being gay. I watch coming out videos on You Tube and they are such a beautiful thing to see. It inspires me towards wanting to do something. If I can have a positive affect and help someone to be more comfortable with who they are, well that is huge. One of the biggest lessons is to just go slowly through the tough issues. Time fixes everything and it really is our teacher.

What is the message of In The Big House?

M.V.: I think America will see a little of themselves in us as the relationships play out. The message of our show is definitely that family is everything. Family is our world.

L.V.: Family is everything. What message could be more important than that?

Comprised of eight, half-hour episodes, “In the Big House” premieres on Monday, July 23 at 10PM ET/PT on Logo.   Check out the extended trailer for ‘In The Big House’ below and let us know if you will be tuning in, we will be!