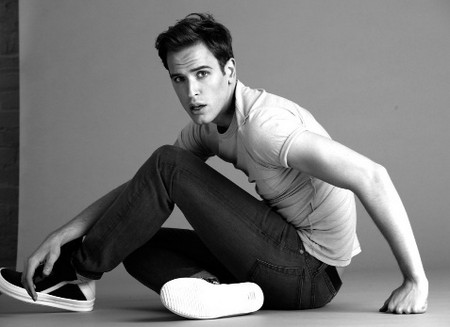 Celeb Dirty Laundry recently interviewed Baker, a New Yorker with more swag than a gold medalist at the Olympic Games. A graduate from Harvard and a classically trained cellist, Baker is one of the biggest supernovas to hit the pop scene in recent years. His music is catchy, upbeat and pure adrenaline fueled fun. He “wants to craft the catchiest, most danceable pop album ever” and this is more than evident in his music.

Baker’s James Dean appearance gives him an aura of unparalleled vintage sex appeal. His music oozes with powerful vocals. His hit single “Not Gonna Wait” resembles the anthem of a love struck generation, in the same realm as pop stars Britney Spears and Katy Perry. His music is infused with a tinge of sensuality, fierceness and thematic prowess. The songs overflow with skillful lyrics and clever tempos.

This multifaceted pop star will become an influential factor in the music industry. He is fresh, young and attention-grabbing!

How has growing up in NYC shaped your personal life and most importantly, your music career?

New York exposes you to a lot of things that I was fortunate enough to see from a young age. The music, the theatre and the sheer volume of cultural and artistic things happening here are second to none.

At which moment in your life did you decide you wanted to become a musician? Please describe this life changing moment for us.

In the 4th grade, I played the cello and one of the annual events I performed for was at Carnegie Hall. There was a small group of us chosen from my school and my whole family was in the audience and I was terrified. I started playing my solo but towards the middle I got lost in it. I wasn’t just playing the cello; I was performing. My whole body and every note was vigorous and filled with emotion and I could hear gasps and people saying “Wow” as I played and received a standing ovation. I got off stage and I had chills up and down my spine and I realized I never wanted that feeling to go away. I chase those chills every day.

What don’t many people know about you?

You have been likened to David Bowie and James Dean. How do you feel about this comparison?

It’s an honor! Everyone has their inspirations and people always compare new artists to old ones but hopefully I’m doing something fresh and something my idols can be proud of.

Do you think music talent shows, such as American Idol and X Factor, are true in their portrayal of the music industry?

Talent TV shows are becoming the music industry. If an artist isn’t discovered as a contestant on one of these shows here or in the UK, they’re trying to be a judge on one of them, right?

Many of our female (and male) readers would like to know whether you’re single or dating anyone special at the moment?

I’m newly single but I’ve been so busy I haven’t had the time to mingle yet.

You were trained as a classical cellist. How has this influenced your current style of music?

It hasn’t directly influenced the music but having had a classical background lays the groundwork for how I listen, either while I’m singing or writing melodies or listening to the production. It’s definitely informed my music in a positive way.

Who is your biggest musical influence?

How would you describe your own style of music?

It’s got a pulse. Not just with the bass lines or the drums but the emotion in them can hopefully be felt. You can dance to it and sing along to it but hopefully it’ll make your day a little brighter or your night a little longer.

“Not Gonna Wait” is a powerful pop song, infused with a catchy beat and head-thumping music video. Tell us a bit about the creative process behind this hit song.

It was really my friends and I filming as I walked around the Standard Hotel in NYC. We’re always there anyway so when I was thinking of a concept the answer was pretty clear to us.

How is your working relationship with Eric Sanicola? What is his creative input like?

He’s a genius. Watching him make a beat is like watching a great artist paint on a blank canvas. What’s great about him and the other guys I’ve worked with is that there’s a real admiration and respect for everyone’s talent we all trust each other. [Eric Sanicola is part of Lady Gaga’s famous RedOne production team]

Your YouTube page has garnered over one million hits. What advice do you have for other aspiring musicians out there who want to be able to reach this iconic milestone?

I wish I had an answer! For me it was a slow and steady climb. I don’t have funny videos with my cat (I don’t even have a cat) or a bunch of covers of other hit songs. It’s original music that was shared over time, person to person. I’m really happy more people are enjoying it.

You are currently working on your second album in Los Angeles. What type of music can fans expect on the album?

Well I’ve been recording a few ballads so there will be LOTS to dance to but also songs to chill out to as well.

Do you have a release date and title yet?

In one sentence, how would you describe this album?

The biggest supernova to hit the pop scene in some time :)