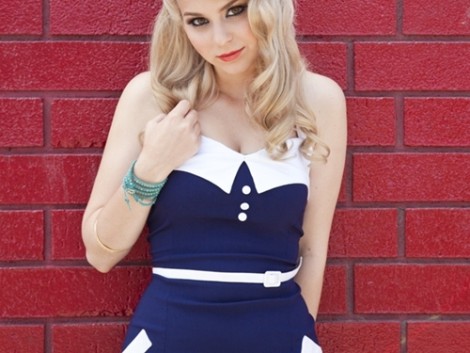 Colette Carr might look like the sweet, blond girl next door but as soon as she opens her lips you realize she’s anything but. With a rap style similar to Eminem and Dr. Dre and an attitude to match Debbie Harry’s, Colette is set to release her first studio album, Skitszo, later this year. She’s already released four singles including her latest hit, Like I Got A Gun. Check out the newly released video below!

Discovered at a rap concert three years ago, Colette was waiting for The Game when she answered Stroy Moyd’s call and freestyled on stage to amazing reviews. And then she was hooked. Since then she’s been fine-tuning her album, traveling the world, collaborating with artists such as Frankmusik and Adammo, and even found the time to co-create her own clothing and accessories brand, Coca-Nico. Celeb Dirty Laundry was lucky enough to catch the busy entertainer and grill her on upcoming news.

Who are your musical influences? Who are some people you would love to collaborate with?

How did you get the idea for Coca-Nico? Are you looking to create an empire or stick mainly to music?

Coca-Nico = Colette + Nicole Carr. Retail is something we are both very comfortable with. We combined her strengths with mine. A light bulb never went off. It wasn’t a grand idea we came up with one morning, it was something we always knew we wanted to do together.

How did you get the courage to freestyle that night while waiting for The Game to perform? Takes a lot of nerve, how has that moment changed your life?

As soon as the announcer asked if anyone in the audience could rap I wanted to jump up there. I knew I could do it.  My sister knew I could do it, and that’s why she wouldn’t take no for an answer. She put her hands on my butt; I put my foot on the stage; and she pushed me up. I didn’t need courage, I was too excited.

That moment made me realize what I wanted to do with my life. I felt a rush and a high that I hadn’t felt since my competitive tennis days. The back injury that cut my athletic career short had me searching for a new passion. The moment I held that mic in my hand and freestyled in front of all those people I had found what I was looking for.

Where to from here? What are your immediate and long-term goals?

Tours and traveling. I am finally ready to put a bow on my album and give it to the goers. I enjoy staying in the moment and taking this journey one step at a time. I don’t want to look back and realize it all passed me by because I was too fixated on the future. I will continue to do it primo, stop to smell the roses, get inspired, write about it, work incredibly hard, and am excited to see where it takes me.

What is something your fans don’t know about you but would surprise them?

Fact: I live inside of a rainbow, and I know where the pot of gold is.

I tweet via @colettecrazy periodically and I am live on the CherryTree chat via Cherrytreerecords.com where they can ask me anything and everything. Goers rule.

Check out Colette’s hit below! Are you excited about her album?