CDL Exclusive: Interview With Stars Of ‘Flipping Out’ Jeff Lewis And Jenni Pulos 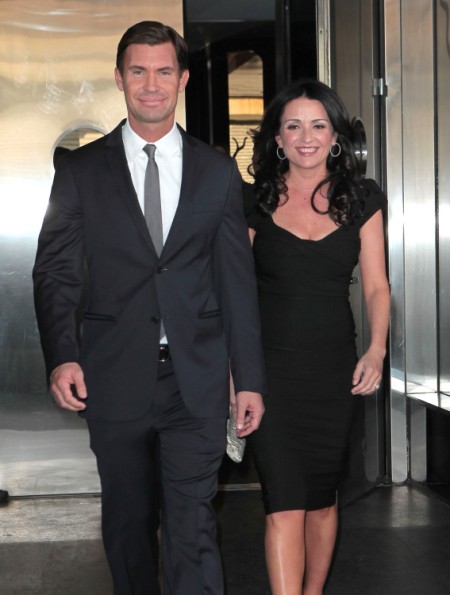 Season 6 of Bravo’s hit reality show, Flipping Out debuts Tuesday, September 4 at 9 EST and the show’s stars, Jeff Lewis and Jenni Pulos, sat down and dished about what fans could look forward to this season. Within the first few minutes Jeff called Jenni a serial killer, said she would fly across the country for a booty call and revealed his good behavior obviously regressed this season! So watch out for the drama!

Not only were Jeff and Jenni fresh off filming Interior Therapy when they began filming Flipping Out, but Jeff also took on the extra duties of helping plan Jenni’s wedding in Chicago, trained a new assistant and oversaw his own remodel. Unfortunately for him, it’s all on tape! But the cast of characters we’ve grown to love, including his no-nonsense housekeeper Zoila Chavez, and boyfriend Gage, were along for the ride to create and buffer the stressful situations and Jenni and Jeff swore they did not disappoint!

On trying to find the perfect people to work with:

JL: Andrew – I had met Andrew on another job and I really liked his work and I brought him on. I did take a look at his resume, which apparently was a big lie, and then I did ask him a lot of questions in his interview, which apparently was more lies. And then we found out – did you ever see that movie Talented Mr. Ripley? Yes, this is part two reality version…. I mean, you can’t write this stuff. I just don’t – I don’t understand why this keeps happening to me. I don’t know if it’s karma – bad karma, I don’t know what I did in a past life. I really don’t, but it was bad – it was a – it must’ve been really bad.

On the stress of this season:

JP: Well, I think that you’ve grown in many ways and then I do think that you were very stressed this season and I think it also had to do with your personal house project amongst other things. But, I think that with that house, I think that was kind of looming and you wanted to get in there but then there were obviously a lot of other factors that came in. But I think overall, you’re handling things better. What I really appreciate about Jeff this year is that when he had issues and he was frustrated, he confronted them and in a healthier way. So you’ll see that on the show, both between, you know, Zoila and myself. So I think there has been growth but, I think when you pile a lot on your plate, Jeff, you know, there – he does – it overwhelms him and he then has outbursts.

JL: We started therapy this season. We started therapy because we were – there was a point where Zoila and I were at an impasse, I think Jenni and I were at an impasse and I just – we just couldn’t – we couldn’t figure it out on our own. So, we did start therapy this season…. But the first three months of the year was me just basically getting back into the business, starting to, you know, return emails and return calls and meeting with these clients and figuring out who was the right fit. So now, the business is booming right now. But it took several months to get back on track. Interior Therapy really kind of sidetracked my business. I think it was because we had reveals after every single episode, so people thought ‘Oh gosh, he doesn’t just – he can’t just do construction, he can do furniture.’ And that was the problem. Nobody knew that I’m actually pretty good at, you know, furniture and art and accessories because most of the time with Flipping Out, when they turn off the cameras after six months, you don’t always get a reveal because it’s a true documentary. We’re not going to fake it and most of these projects aren’t finished by then.

How Jeff finds the courage to say whatever’s on his mind:

JL: You know, I don’t know if it’s confidence because I actually am a very insecure person. So, I think it’s almost like a lack of some sort of filter. And I just feel compelled to tell people the truth and…. Wow…. I just – I can’t stand phonies. I can’t stand people that – like, when you know what somebody will say, ‘Oh, you look so great today’ and they don’t really mean it. Like, if you ever get a compliment from me, I mean it. So you can always count on me to tell you the absolute truth. Now, does that get me in a lot of trouble and is there consequences? Yes. But, I just prefer to live my life in an honest way and I don’t know if it has anything to do with confidence. I don’t feel – I don’t always feel so confident.

How Jenni and Jeff continue to stand each other’s company:

JL: We go through periods where we do question each other’s trust and loyalty but the love… is always there and the desire to work things out is always there. It’s not really an option to separate. It’s not really an option to not be friends. I think we’ve made that commitment to each other. We can’t really leave each other’s lives. And Gage – God, Gage just said this a couple months ago because I was really angry at Jenni about something that comes out in the show and Gage said to me, ‘You know what, you have done this before where you two separate and you’re miserable without Jenni,’ and he’s absolutely right. So even though I go through periods where I’m really angry with her and I kind of just want her to go away, a week later I miss her. So, we made that commitment to kind of work through things no matter what.

JP: You know, we’ve worked together over 10 years and we calculated actually how many hours we’ve actually spent, him and I together, and I mean, what did we figure out, Jeff?  It was… thousands. So, I think that kind of opened the door of being – feeling like family. And I do trust him, you know, to kind of reflect on the last question he just answered. You know, he does tell you what he’s thinking and sometimes you’re going to like it and sometimes you’re not, but ultimately, he’s tried to be my friend outside of my employer and we’ve had a lot of ups and downs, you know, like any, I suppose, relationship that is good and can stand the test of time. But, you know, sometimes I want to kill him, let’s not kid ourselves.

Jenni on getting married:

JP: Anyway, I found the love of my life and I’m really excited and he’s giving up a lot for me. He’s moving and has moved, as of two weeks ago, to Los Angeles. He grew up his whole life in Chicago, so we did get married here. And I don’t know, I just – I’m in a happier place personally than I’ve ever even known I could.

Check out a sneak peek at Season 6 of Flipping Out below. I think it looks hilarious! Are you ready for more of Jenni and Jeff? Who are you the most excited to welcome back? I’m a huge Zoila fan!