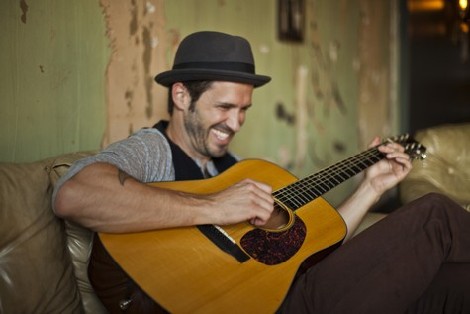 Tony Lucca hasn’t always taken the straightest path or the easiest and certainly not the shortest but he eventually gets to where he needs to go. And after coming in third place in the second season of The Voice the 36-year-old has recently been signed by former mentor Adam Levine for his new label, 222 Records. Now Tony’s busy writing songs around his whirlwind touring schedule in an effort to get into the studio by the holidays and capitalize on the new sound that he and Adam tapped into while collaborating on the show.

“I went on The Voice to initially gain some additional exposure but what we tapped into on the show, and I say we as in Adam and I, was a different creative direction for me,” he exclusively told Celeb Dirty Laundry. “[The new album] is a little edgier and has a little more grit to it than the singer/songwriter fare that I’ve been producing the last several years so I feel inspired personally to kind of build upon that and take our lead from the reaction we got from all those songs.”

One of those songs being the highly successful cover of Hugo’s version of Jay-Z’s 99 Problems which went on to the #3 spot on iTunes Overall Singles sales chart and #1 on the iTunes Rock Singles chart. It also exacerbated a simmering feud with fellow ex-Mouseketeer, Christina Aguilera, which might or might not have (depending on who you talk to) cost him the big win in the end. But Lucca contends he harbors no hard feelings toward Christina and would choose the song all over again if he had the chance.

“You know, I think it’s clear at that point you can go for the win or you can go for a different kind of win and I feel like I won something with that one especially the way it charted on iTunes so significantly. I don’t think we could have picked a cooler, stronger choice,” he said. “But you know at the end there when the confetti flew we [Christina and I] did have a few words that weren’t moderated by Carson Daly and basically both kind of agreed that this whole thing just sort of snowballed into something rather petty and silly and we both agreed to try to be cool and move forward and that’s that.”

Moving forward can be challenging when some might say you’re too old or you missed your shot at a hot career similar to Christina’s. When fellow Mickey Mouse Club alums like Ryan Gosling, Britney Spears and Justin Timberlake graduated from the show and quickly moved on to wildly successful solo careers, Tony took a step back from the limelight and slowed his pace. You can play the guessing day all day long with what might have been but Tony says he has no regrets.

“Timing is everything and I was one of the older guys on the show so I felt like I kind of needed to go see the world and travel and figure out what I wanted to say and what kind of choices I wanted to make. And I certainly am not discrediting any of the choices any of them made, because clearly they went on to make history, but I was taking the path less traveled I suppose. That was important to me at the time. When I started writing and recording music it was definitely not a continuation of the sort of popular mainstream direction that most of them had taken,” he said.

But taking the path less traveled is not always without its drawbacks. And after years of producing albums and getting by, Tony decided to leave Los Angeles and resettle in his home state of Michigan. He was regrouping and was as shocked as anyone that he chose to regroup on a reality singing show.

“I’ve always been a bit reluctant with the whole reality TV show singing contest… but I kind of took a second and said ‘Well you know I’ve got a pretty interesting story. I’ve had success. Something like this would be good for the exposure alone and certainly help catapult things a bit for me’,” he explained. “I was regrouping and deciding what to do next and the timing was pretty spot on and I decided to just go for it. Three to five years ago, I don’t know, maybe my pride would have gotten in the way, like I had a little more to prove still, but I was in the right place and it seemed right. As much of a struggle it has been from time to time, it’s a struggle I’m proud of and I feel strong about it and I wouldn’t trade it for anything.”

Because, essentially, color, character and the steely determination to take risks because you don’t know when the next big opportunity will come along, are all born of struggle. The Voice was a risk for Tony, and luckily, one that continues to pay off. And because the best thing to do with good advice is to give it away, Tony encourages this season’s contestants not to be afraid to break outside the box and find the risks. It might not be the easiest, shortest or most straight forward decision but it might just end up being the right one.

“Be delusionally confident as Adam puts it,” he said laughing. “You have to bring a good deal of charisma to it not just for the sake of TV and the producers. As an artist, they are looking for people who aren’t afraid, that have the courage to do what it takes to push forward in the contest. Maybe that’s symbolic or a metaphor for life, I guess. But you look back on the seasons and who do you recall? Who do you remember? Whether they won or not you remember people that made bold choices. I certainly thought that was some of the best advice I got from Adam – knowing when to take the calculated risk and owning it and that seemed to pay off for us.”

Are you excited for Tony Lucca’s upcoming album? Do you agree that most of the standout performers were the ones who took the greatest risks?