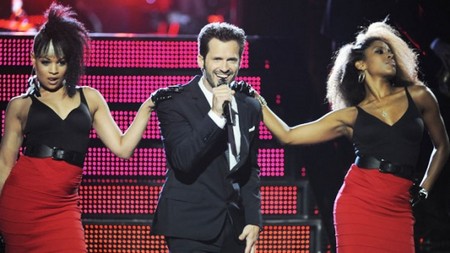 Tony Lucca sang “99 Problems” by Jay Z on tonight as The Voice ‘Live Final Performances.’   The final four performers took the stage tonight for a chance at a recording contract with Universal Republic and $100,000 prize.  If you missed tonight show, we watched it and we recapped it HERE for you. If you missed Tony’s last week performance you can see the video here.

The four remaining contestants performed one song tonight, then they will join their coaches to perform another during the live broadcast.

SEE: Christina Aguilera And Adam Levine In Bitter Swearing Brawl On The Voice

Judges comments: Blake: “A what ain’t one “What a really cool version of that song.”  Christina: Holding a cup of coffee, “I thought the connotation was a little derogatory towards women, but it was good.”  Cee Lo: “It went hard. I liked it!”  Adam: “It’s about life gettin’ at you …”
Christina: “The song says, ‘If you’re having girl problems …'”   Adam: “It’s called a metaphor … I just wanna say, I love you, Christina.”

Watch the video below and let us know what you think? Do you think that Tony did enough to win the competition? Sound out in the comments below!