Christina Aguilera and Adam Levine in Bitter Brawl On The Voice 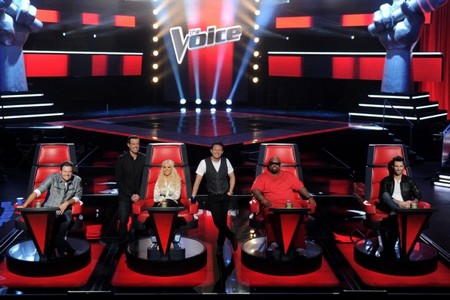 It seems a huge fight during a rehearsal for the finale of The Voice turned explosive for both Christina Aguilera and Adam Levine.  The two had a shocking verbal brawl with Adam calling Christina some terrible swear words!

“Christina found out that Adam planned to have his finalist, Tony Luca, sing 99 Problems by Jay-Z, in which he’ll sing “I’ve got 99 problems but a bitch ain’t one” a source explains. “Adam and Tony wanted to call Christina out as a bitch but make it clear she’s not a problem for Tony. It was completely aimed at her. It was Adam’s idea, but Tony absolutely loved it.”

Christina found out the plan and as expected, had a complete meltdown.

“Christina thought it was ridiculous. She was highly offended,” the source explained. “It ended up that NBC told Adam to change ‘bitch’ in the song’s lyrics to ‘chick.  Christina is so sick of Adam being looked at as the golden boy of the show. If America knew how disgusting he was, they would be appalled, she always says,” the source admitted.

Adam fought hard to prevent the changes, saying that altering the lyrics ruined the song. He likened it to a “death sentence” for Tony.  When Adam didn’t get his way he went verbally gunning for Christina.

“Adam went right up to Christina and said ‘you’re the biggest f***ing c***,” the source said. “Obviously Christina was appalled and hissed that Adam should be fired. She’s sick of being treated this way.  Adam wouldn’t do anything until this gets figured out,” the source revealed. He was being incredibly immature.  By midday it wasn’t even confirmed that Adam would be going through with the coaches’ performance. It was that bad.”

Should Adam have won this battle?  Would you have had Christina’s back instead?   Christina has acted like a bitch towards Justin Bieber and The Wanted – has her lousy personality finally caught up with her?  Let us know in the comments below.