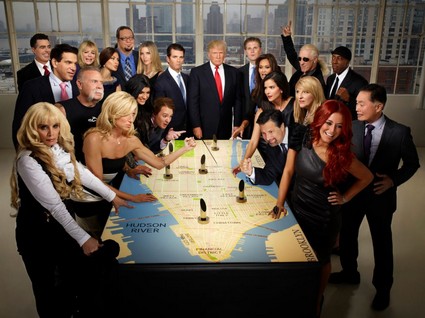 Have you had a chance to see who is going to be on the show? If not, you can meet the celebrities HERE.

This season’s cast has Teresa Giudice, no doubt she will be the NeNe Leakes of this year’s crew.  Dee Snider looks to be this year’s Meat Loaf type.  The first person who is fired is not someone you would expect to have problems getting along with others.  The surprising thing is, this person is not upset about the firing, weird.  The spoilers make it sound like they were ready to go home before Donald Trump said “You’re Fired.”

In tonight’s episode, the celebrities run a sandwich shop for their first challenge.  Penn Jillette stands outside trying to bring customers into the business.   He is juggling bowling pins as he yells out at customers.  Penn does bring in someone who is willing to tip $500 for sandwiches.  Clay Aiken convinces him to give $1,000 instead.   Lou Ferrigno holds a sign that says “eat here or I’ll eat you.”   Debbie Gibson serves grilled cheese, sings Happy Birthday to Wyclef Jean, who is not a contestant but is helping out with their charity efforts, and then performs “Only in My Dreams,” during which she rapped.

Who are you rooting for? I think Clay Aiken is going to be the celebrity to keep your eye on. Having worked with Simon Cowell, Trump should be a breeze for Aiken.   Also, he has a degree from the University of North Carolina, so he will be bringing his brains as well as his celebrity status to the show.   I really don’t think this will end up as another Clay SHOULD HAVE WON but is the runner up situation.

Sadly for Trekkies, I think the legendary George Takei will be the first to go because he is just too nice for this show.

‘The Celebrity Apprentice’ 2012 will begin tonight at 8pm. Each episode will be two hours long on NBC. Don’t forget to come back to Celeb Dirty Laundry  for the full official recap, this is going to be an awesome season, you don’t want to miss one episode!  Check out the promo video below.