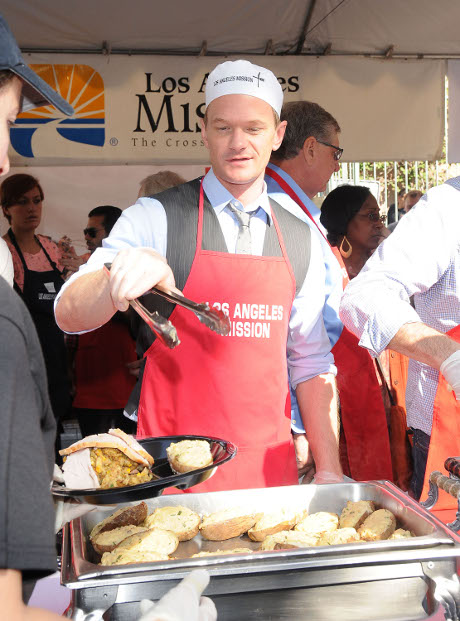 It’s great to see celebs participating in activities that don’t involve red carpets, champagne glasses, and fancy clothes, and there’s no better time to witness celebs in their “do good” nature that during the holiday times. Thanksgiving has been here and gone, but many celebs went out to give thanks by giving back to their communities, and as we continue to get into the holiday season more cheer will be spread. This time of the year is characterized by the gift of giving, and how just a tiny gift — of whatever you can share — can mean so much.

Neil Patrick Harris was seen out and about feeding the homeless this holiday season at the Los Angeles Mission. Many other celebs were also seen helping out, including Malin Akerman, Blair Underwood, Stephen Collins, Bella Thorne, and Matt Bomer. President Barack Obama, wife Michelle Obama, and daughters Sasha and Malia, also handed out food; however, they were spotted in D.C.

While we all think celebs stay holed up in their million dollar mansions all day, many of them aren’t much different from us, and jump at any chance to give back. Many celebs practice this tradition on a yearly basis. Last holiday season we saw Kim Kardashian, Zoe Saldana, and Jennifer Love Hewitt spreading the holiday cheer, and we wouldn’t be surprised if we saw the out and about again this year.

Lindsay Lohan also went out last year to help out in the community — though we’re not going to bet on her participation this year. She’s currently a bit preoccupied.

As the holiday season kicks into overdrive, we’re eager to see who out there gets involved. Celebs, though busy, have a lot of time and resources, and so many of them have the ability to do good things. It makes us feel all warm-and-fuzzy inside, and we like feeling that way. Who would you like to see park their fancy car and do some good for someone else? Let us know in the comments section below!